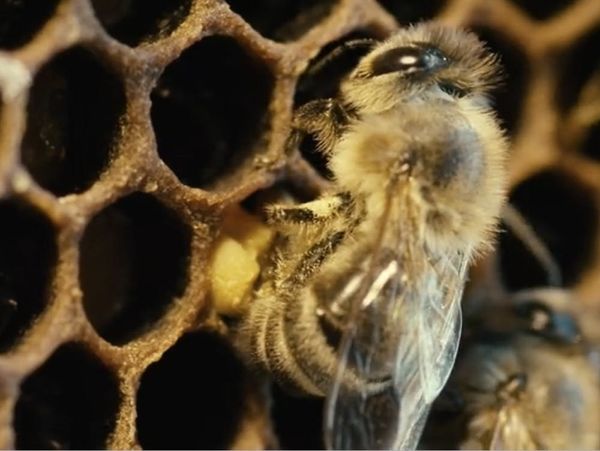 It’s Earth Day, and we’ve been plenty busy prepping, practicing the eco-friendly tips Shailene Woodley dished to Nylon, marveling at Emma Roberts’ sustainable red carpet fashion, and nixing these not-so-environmentally friendly foods from our diets. There’s no greater motivator than knowledge, however, so for those who need a refresher about why all this mumbo jumbo is so important or simply want to delve deeper into some fascinating — if troubling — topics, boy, do we have a list of binge-watches for you. Check out nine docs that were practically made for Earth Day below.

With major companies like Burt’s Bees in partnership with Pretty Little Liar’s actress Troian Bellisario and Cheerios, you’re likely already aware that bees are disappearing at an alarming rate. Those seeking to understand the ins and outs of how and why would do well to watch More Than Honey, which sees the filmmakers traveling the world to investigate and is being hailed as a “definitive work on the subject.” Given Einstein’s calculations that “If bees were to disappear from the globe, mankind would only have four years left to live,” we’d do well to learn all we can from it. (Photo via Netflix)

In our technological era, this essay in documentary form addresses our ever-evolving relationship to the planet and our co-inhabitants on its surface as we become more alienated from nature. Starring Vanessa Paradis (and some absolutely mind-blowing shots of the world around us), it also offers up thoughts on how we might still change our standing with them both. (Photo via Netflix)

Still have doubts about climate change? Watch Chasing Ice. Originally assigned as a photography assignment for a National Geographic study (ironically to a photog that didn’t believe in climate change), the proof was in the pictures, and the film that evolved from it. (Photo via Chasing Ice)

The Emmy Award-winning Mission Blue gives a face to activism, as it follows the life of Dr. Sylvia Earle, a woman (and oceanographer) with a single, laser-beam focus: saving the ocean. To do so, she’s working all the time to create “Hope Spots,” or a national park for our water, if you will. She believes they are the best way to save our planet’s water crisis, with less than four percent of the ocean currently protected. Oh. And did we mention there’s some pretty badass cinematography, as well? (Photo via Netflix)

With an estimated 300 billion bits of plastic currently floating around in the Arctic ocean alone, the stats are staggering, but for those that need a visual to feel invested, there’s A Plastic Ocean. Filmed in 20 global locations over a period of four years, the documentary showcases the upsetting aftermath of our increasing plastic usage front and center — and tells us what we can do to stop it. (Photo via Netflix)

With a fitting title on a day like today, this flick documents the origins of Greenpeace and offers up some of the principles of its co-founder and original President, Robert Hunter. With steps like “Get Involved: Become a Volunteer,” you know you’re on the right track to activism at its finest. (Photo via Netflix)

Like More Than Honey, GasLand, which was nominated for a Best Documentary Feature Oscar back in 2011, seems more relevant than ever in the wake of mounting concerns over the Dakota Access and Keystone XL Pipelines. GasLand explores the hazards of pipeline drilling when the filmmaker, Josh Fox, is asked to lease his land for drilling. The quest he goes on after reveals some pretty shocking finds — like flammable drinking water — about the effects the practice can cause. (Photo via Netflix)

Animal lovers will be left moved (read: brokenhearted) by this film documenting such topics as black market trade of exotic animals, poaching, puppy mills, and more. But for every cloud, there’s a silver lining, and the documentary finds it in the form of its subjects, who not only fight for animal rights and aim to raise awareness, but also rehab and care for animals in need. (Photo via Netflix)

Like to eat? This one’s for you. Foodies will likely recognize the stars of this film, which include such renowned chefs as Rick Bayless, as it explores America’s ethical struggles with regard to industrial farming. It also delves into the growing sustainable food movement working to correct them in order to provide us with continued sources of delicious and nutritious foods. (Photo via Netflix)
From Your Site Articles
Nicole Briese
Nicole is the weekend editor for Brit + Co who loves bringing you all the latest buzz. When she's not busy typing away into the wee hours, you can usually find her canoodling with her fur babies, rooting around in a bookstore, or rocking out at a concert of some sort (Guns N' Roses forever!). Check out all her latest musings and past work at nicolebjean.com.
Earth Day
Streaming
Earth Day Eco-Friendly Netflix