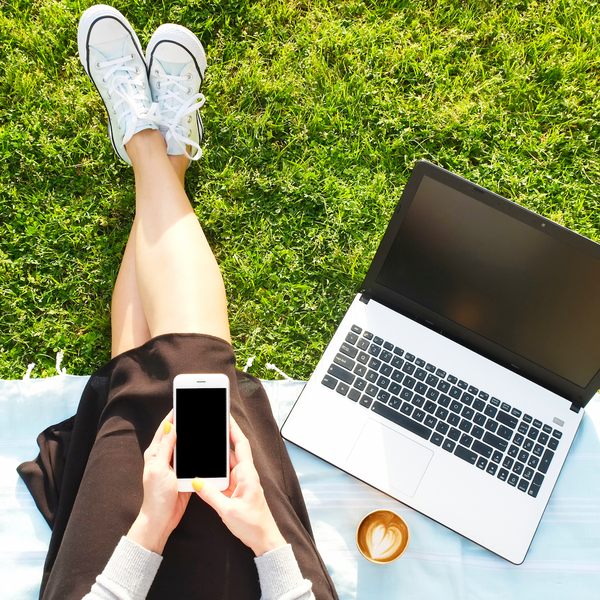 As far as I can Google, no one is really sure about a point of origin for New Year's resolutions. Many (at least the collective behind Wikipedia) trace them back to the fact that the month of January is named after the Roman God Janus. Janus had two faces, one facing backward and one facing forward, so January became associated with reflecting on the past and meditating on the future.In order to succeed at keeping tabs on technology as a job, you should more or less always be forward-facing — learning about the past only so you can better understand the future. Often times you're so busy trying to stay ahead of the curve that you neglect to optimize your own tech habits, which is why I took the entire day today to think about the things I'd like to change about the way I interact with and use technology in 2012. Here they are, may they also bring you inspiration.

1. Clean up my iPhone home screen.

I've got apps I use daily, like the CS Live iPhone sync app that I'd ostensibly need to use every time I get in my car (to sync my phone to the radio) on the iPhone's fifth page of apps. So slobby. Then there's the bizarre situation of the last four or five pages with only four or five apps on them. Next time I'm waiting in a line or have a few seconds free, I'm getting rid of orphans and sorting the ones I use the most into folders. It's time to be more ruthless about testing apps, either promoting them or junking them.

My screenshots — which I use for images in blog posts — default to my computer's desktop, my downloads to a Download folder. And I'd really like them to do the opposite (downloads to the desktop and screenshots to a Screenshot folder) but I really am still using all the default settings that came with my computer, a year and a half later. In the same vein as the iPhone home screen, this year I resolve to take fifteen minutes to figure out what mode of PC organization works best, saving me hours of lost time later on.

Phone and laptop constantly run out of battery? Plug them in as often as you can (it doesn't harm battery life, I promise). I've gotten okay at this in the past year, but just okay. 2012 is the year to take it all the way baby, maybe even getting a Mophie or um, using my phone less. Also, I've found that having some sort of car charger works in these situations — if you don't mind looking kind of dorky.

4. Finally take my computer in for a hard drive fix.

My MacBook runs slow because of hard drive issues — and it is also missing three of its "feet." I'd get a new one, or a MacBook Air, but it has the most beautiful matte HD display and I'm also not a fan of tossing perfectly good tech. A fix will run me about $500, so why haven't I done it yet? WHY?

Back in the days when I had 60 followers, I used to use my Twitter account as a notebook, like a way to jot down random thoughts and share links. At this point, because of my work at TechCrunch, it has a circulation of 35K, and that needs to be taken into account when I make a dumb joke or go into a rant or am wrong about something — also, when I've tweeted 14 times in a row. Basically, think/Google before you tweet.

God I love Evernote, and I love the fact that iCloud synched up all my old contacts when I lost my phone two weeks back. Computers come and go, but through some combination of Google Docs, Gmail, Dropbox and Spotify, you can pretty much access all of your stuff, from everywhere. Sort of reassuring.

I have an UP, and if I used it regularly it would change my life (provided that it worked), so yeah, I'm going to do that more.

8. Unplug every once in awhile.

Tons of people resolved to not be so addicted to Twitter and Facebook this year — the NYT's Nick Bilton promised himself 30 minutes of Internet-free time a day. Going outside, getting exercise, talking to people in real life instead of on social networks — all lovely and necessary things. Let's all do them more.

My parents love anything un-Apple, like janky Android phones and Dell machines, but if my Dad gets an iPhone he can follow me on Instagram or Path. I seriously think this will bring us closer together. Maybe I should just buy him one?

10. Take the two minutes to 'Unsubscribe' to emails I no longer want to receive.

"Good news! So and so started following you on such and such!" There is a link in those emails to something called "Manage notifications." That turns those off. Click on that link Alexia, click on that link.

11. Be more mindful of online distractions.

Every time I'm in Gmail and see that little red Google+ notifications thing, I click on it. Sometimes I just sit there while trying to write a post or do an expense report clicking on random things from Twitter, and then putting them in a collection of random things I find on the Internet. Sure this is part of my "creative process," but it's also just a "waste of time."

I was at the beginning stages of learning Python before I got my job at TC, and dropped it because the demands of a new job didn't leave much room for anything else. Now that I'm a bit more settled, I've just signed up for Codecademy's Code Year courses and we'll see how it pans out. It's going to be great to know how to build stuff– both to be able to talk to people about the stuff they build and actually to build stuff! Also: street cred!

Alexia Tsotsis is a writer at TechCrunch, a blog focused on breaking technology news and analysis. She is most interested in the relationship between technology and culture in the 21st century.