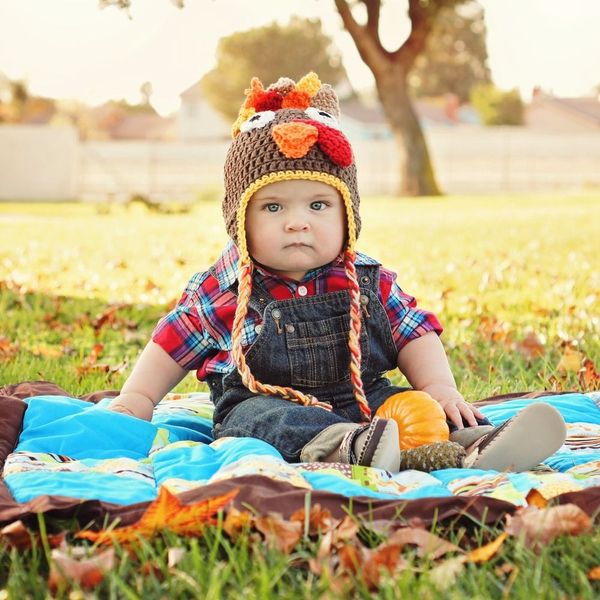 If you’re still looking for a name for your late November babe, the Thanksgiving story has several interesting baby names tied to the holiday, from arrivals on the Mayflower to those who established it as a national holiday to the perennial parade. Here are some of the best Thanksgiving-related names.

1. Alden: John Alden sailed on the historic Mayflower’s 1620 maiden voyage to America and became a prominent member of the Plymouth Colony. Alden, which means “old friend,” is currently ranked at #720, was a Top 500 name from 1911 to 1932 and is likely to rise again via Alden Ehrenreich, the new young Han Solo.

2. Amity: Virtue names were popular with the Puritans, and a surprising number — beyond the expected Hope, Grace and Faith — are usable today. Amity, which means friendship, is a neglected gem, and others we love equally well are Verity, Mercy and Clemency — all aspirational virtues in the modern world.

3. Elias: In 1789, NJ Representative Elias Boudinot presented a resolution to Congress requesting it to persuade President Washington to declare a thanksgiving observance to celebrate the new US Constitution. So here’s a toast to Elias, whose Greek name now ranks at a solid #200, following in the wake of biblical original Elijah. It also ranks fifth among the most popular baby names in Sweden.

4. Josepha: For 36 years, Sarah Josepha Hale, author of “Mary Had a Little Lamb,” campaigned to establish Thanksgiving as a national holiday. Sarah, of course, is a biblical classic, but her middle name, long neglected, could make a more distinctive girl’s namesake for Joseph than Josephine. It’s Josefa in Spanish.

5. Lugh: Most of the ancient deities associated with the harvest are goddesses — Ceres, Demeter, Parvati — but one of the few males in the pantheon bearing one of the most interesting mythological names is the Celtic Lugh, pronounced Lou, and it’s also known as Llew in Welsh myth. Definitely more distinctive than Hugh.

6. Macy: Macy’s Thanksgiving Day Parade has been an NYC tradition since 1924, when it featured the store’s employees in costume and animals from the Central Park Zoo, as well as a Mickey Mouse float. The upbeat name has been largely associated with jazz/soul singer/songwriter Macy Gray, who was born Natalie MacIntyre, but its use is now spreading — it’s at Number 413 and was chosen by actress Edie Falco for her daughter.

7. Maize: Corn was one of the principal crops of the early Plymouth colonists and a staple of their diet, so it is no surprise to find it was on the first Thanksgiving table. Maize is also a color name and sounds like a cute shortening of Maizie. It’s one of the unique baby names that may appeal to adventurous parents.

8. Oceanus: Oceanus Hopkins was the only baby born on the Mayflower’s maiden voyage. His name is doubly on trend — as both a water name and a Latinate appellation ending in “us.” In Greek myth, the Titan Oceanus was believed to be the father of rivers and water nymphs.

9. Peregrine: Peregrine White, brother of Resolved, was an in utero passenger on the Mayflower, the first known English child born to the Pilgrims in America on the ship when it was docked in Provincetown. Often heard in the British aristocracy, Peregrine has never crossed the pond, despite its standing as both a saint’s and bird name. Downton Abbey creator Julian Fellowes, not surprisingly, used it for his son.

10. Tom: Every poor turkey sacrificed for the feast’s table is a Tom — the generic name for a male turkey. Though among the most classic nicknames for boys, Tom has been off the US list since the early 1990s. But it’s a Top 50 name in Ireland, Germany, Belgium, the Netherlands and France — where it’s Number 13! — and could return here a la Sam and Ben.

11. Thursday: Thanksgiving has been the last Thursday in November since George Washington’s day, solidified by an Abraham Lincoln 1863 proclamation. As for the name, we’ve had Sunday Rose Kidman Urban, Tuesday Weld and Wednesday Friday Addams. Could it be Thursday’s turn next?

12. Truman: It was President Harry Truman who started the tradition, in 1947, of pardoning a turkey or two and sending them into retirement on a farm. The name Truman carries the aura of that president’s integrity and humility and reached its highest point in the year of his inauguration, 1945. It’s now just inside the Top 1000.

Do you know any Thanksgiving babies? Share their names with us @BritandCo!

- -
Nameberry is the expert baby names resource, with thousands of names and unique lists, a vibrant community, and fresh content daily, all designed to help you find the baby name you'll love for a lifetime.
Thanksgiving
Baby Names
Thanksgiving
More From Baby Names