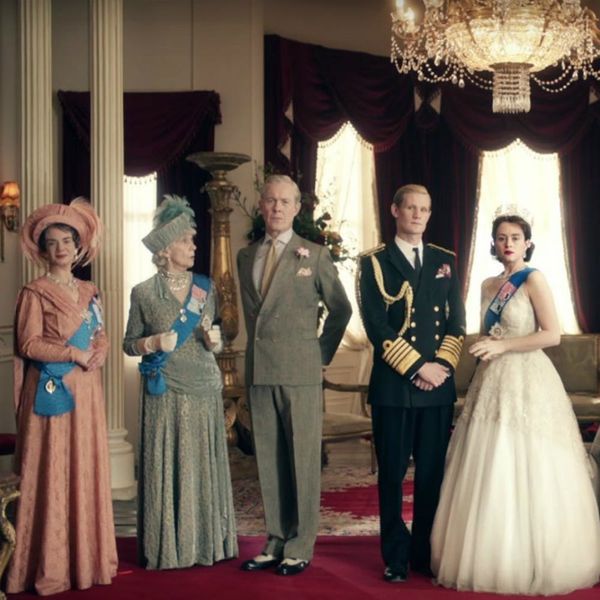 Thanksgiving week is here, and while the week usually centers around that perfect Thanksgiving meal, there’s also a boatload of downtime, especially if you are one of the lucky people who get to take the week off. Realistically, you aren’t going to spend the whole time hanging with your siblings or helping your parents around the house. Instead, you’ll be in your coziest lounge wear, hunkered down in your parents’ basement streaming Netflix like whoa. And in order to make sure you don’t spend half your time scrolling through your account trying to find the perfect show, we’ve got you covered with our faves to stream this week while you’re at home for Thanksgiving and waiting for Gilmore Girls to drop on Friday.

1. Friday Night Lights: This teen drama based on a movie of the same name gave us everything when it originally aired. Centered around a fictional Texas town, the show’s five seasons deal with everything from drug use to racism. With Taylor Kitsch’s celebrity-making turn as football star Tim Riggins, this is definitely one to watch if you’re feeling like you need some emotional release.

2. Mad Men: This show was the one that put AMC on the map. Season one is especially entertaining, and even just seeing how differently women were treated back in the 1960s is wild. This one may not be ideal to watch with your folks, however, because there are definitely some really sexy moments in there.

3. Master of None: This Aziz Ansari show will be back for a second season, but the first is great to either watch for the first time or watch again over your Thanksgiving break. Funny, poignant and real, this show is one for all of us struggling through single life right now.

4. Lady Dynamite: Another Netflix hidden gem, Lady Dynamite is dark, funny and totally surreal. This one is really out there, but totally worth your time if you’re feeling like a dark comedy helmed by a really funny lady.

5. The Crown: Another Netflix original, The Crown tells the story of England’s current monarch, Queen Elizabeth II, in her early years as ruler. The costumes and sets are to die for. Basically Downton Abbey 2.0.

6. Downton Abbey: Speaking of Downton Abbey, why not take a look back at the Crawleys once again? There’s nothing we love more than accents and period costumes.

7. Penny Dreadful: Talk about costumes! This show is more on the dark/gothic side, and has a cast of characters from other famous places (Victor Frankenstein and Dorian Grey, anyone?), but is basically a crossover between Victorian sci-fi and a good old true crime show. The costumes and sets alone are worth watching, but the story and characters are why you’ll stay.

8. Archer: If you haven’t seen this show before, be prepared. It’s dirty, funny and definitely not for kids. Do not watch this show while babysitting your nieces and nephews, but do watch this show if you’ve been drinking wine with your cousins.

9. New Girl: This show has everything: It stars Zooey Deschanel as a newly single girl who lives with three guys she has met online. Of course, what follows is drama, comedy and their very own drinking game. Who doesn’t love a drinking game? This one is perfect for your high school gal-pal reunion.

10: Parks and Recreation: Leslie Knope has become a beloved sitcom character unlike any other. Her unbridled optimism and love for her friends are goals we aspire to. Why not watch her again while hiding from your grandparents?

11. Unbreakable Kimmy Schmidt: Another Netflix Original, UKS has two seasons to burn through this week. With instant classic moments and some surprising celebrity cameos, UnbreakableKimmy Schmidt — created by the hilarious Tina Fey — has something for everyone. Even your mom.

12. Friends: The original “Must-See TV,” Friends has surprisingly stood the test of time for a show that started in the ’90s. There are a bunch of Thanksgiving episodes, and you could probably recreate Ross’s “Moist-Maker” Thanksgiving sandwich at some point over the weekend.

13. Fuller House: Okay, so season two isn’t out for another two weeks, but while we wait for it (and it looks even cuter than the first season), we can relive season one!

14. Grace and Frankie: Do you need something to watch with your parents? This show is a real pleasant surprise. You’d think it was more for older people, but there’s so much funny, poignant stuff in here, so grab a glass of Chardonnay and sit back with your mom and grandma and laugh.

What will you be watching this week? Tell us @BritandCo!

Kat Armstrong
Kat has been a writer, social media maven and mom for longer than she's willing to admit. She's also spent time in front of and behind the camera, interviewing celebs, politicians and acting as a producer for fashion and artistic photography shoots. When she isn't writing for various orgs and publications, she's hanging with her kids, husband and French Bulldog, Peter, in Toronto, Canada.
Netflix
Pop Culture
Netflix Streaming