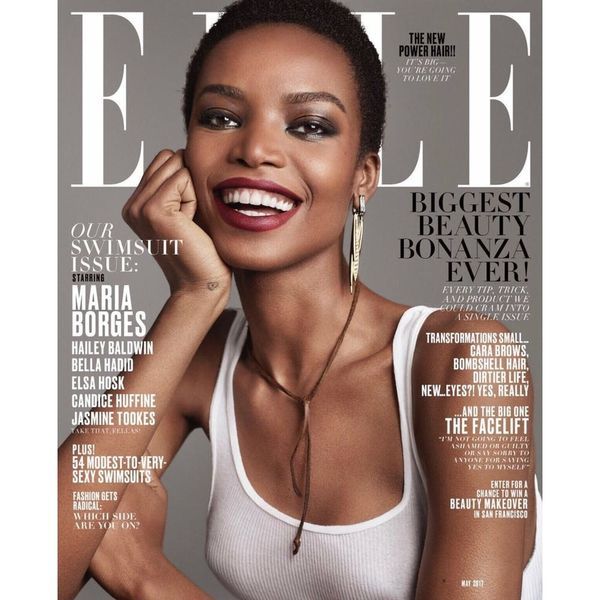 African women are not new to the fashion world. Supermodels like Iman graced coveted runways in the ’80s and ’90s, paving the way for generations to come. While the fashion industry struggles with claims that it lacks diversity, one African model, Maria Borges, is breaking new ground. Added to a line of lucrative contracts, fellow model friends like Gigi Hadid and Adriana Lima, and recently, the L’Oréal Paris global ambassadorship, the 24-year-old model just landed one of six Elle Magazine covers for its May 2017 issue. She’s the first African model to grace the Elle cover this century, after Sudanese model Alek Wek graced it back in 1997.

A resume with that much credence means it’s time we got to know a little more about this beauty! Here, five things to know about Borges, a name you’re about to hear everywhere.

1. She looks familiar for a reason! Borges has been a Victoria’s Secret Angel in the famous fashion show for four years now. In 2015, she made headlines when she opted out of the hair weave and signature VS waves for her short, natural hair.

2. She recently signed a multi-year deal with L’Oréal Paris. As the cosmetic giant’s global ambassador, Forbes estimates Borges’ annual earnings to be in the six to seven-figure range.

3. Don’t let the dollar signs fool you! Borges seems very humble, and that’s for a reason. The 24-year-old was raised in Luanda, Angola, during the time of the country’s civil war. She participated in an Elite Model Look Angola contest and signed with a local agency that eventually led to her first overseas gig and blossoming career. Borges remembers her roots and frequently returns home to give back. Fun fact: Angola is the only Portugese-speaking African country, so Borges’s fluency in Portugese may be why she’s so close to Brazilian models Alessandra Ambrosio and Adriana Lima.

4. She is a fave on the runways of Chanel, DVF, Balmain, La Perla, and a plethora of other fashion houses. But it’s Givenchy that catapulted her career. After arriving stateside, Borges landed a Givenchy campaign in 2013. She considers designer Riccardo Tisci her “godfather,” and actually credits him with encouraging her to truly embrace her natural hair. Fun fact: Borges is also BFFs with Edward Enninful, the newest editor-in-chief of British Vogue. The two frequently swoon over each other on Instagram.

5. As if her impressive resume and rolodex of famous friends didn’t keep her busy enough, Borges also finds time to work out! She documents the routines that keep her arms and legs lean and toned on social media.

“When I was growing up, I never saw someone like me,” Borges told Elle, “and now the other girls can see someone like them. It’s all about inspiration.” We are SUPER inspired by this rising star, and it’s refreshing to see the fashion industry take steps toward inclusivity and diverse representation. We’re sure there’s much more to come!

Have you heard of Maria Borges? Tell us @BritandCo!

Love Moore
Love Moore is a freelance writer based in Brooklyn, New York. She has a BA in journalism and loves homemade meals, snow days and bookstore corners.
Style News
More From Style News