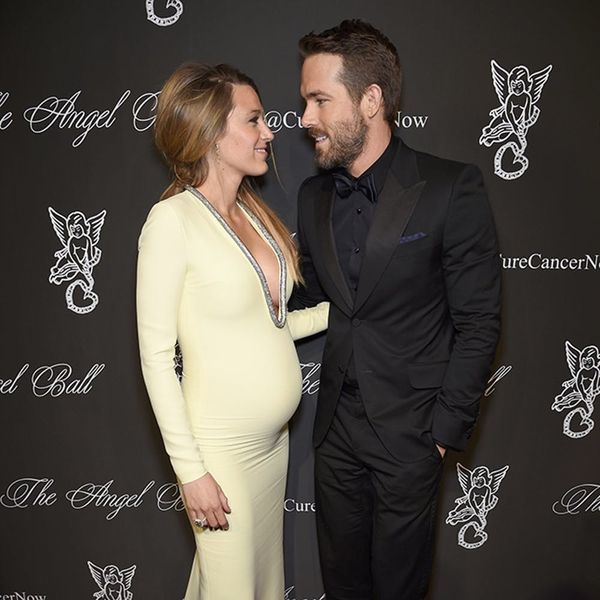 After news broke that Blake Lively and Ryan Reynolds gave birth to baby girl back in early January, the rumor mill immediately began to spin with baby name ideas. Then, somehow the internet decided that the celeb newborn was named Violet. While the couple never confirmed the rumor, everyone and their mom decided to believe it, because we all love baby names and Violet is definitely a great one.

So it’s with a heavy heart that we tell you Violet is actually *not* the babe’s real name. In a recent interview, Ryan Reynolds told USA Today, “No, that’s not the name. I don’t want to get into that but I don’t know where that came from.” Reynolds didn’t even crack after he received a full integration from David Letterman on the subject. “We definitely [have a name] I threw out the idea of just never naming the kid to be totally original, but, no, we have a name,” he said in his appearance on the Late Show. He went on to say, “I don’t want to say it in a media context — I tell everyone who I meet, so it’ll come out.”

Well, c’mon guys! We don’t want to hear it from a friend of a friend, we want to hear it from you two! So just in case the couple changes their mind we’ve decided to round up a couple of creative name reveal ideas for them (or you, pending parents!) – all of which would look pretty epic on Blake’s dreamy blog… just sayin’.

1. A Shot of the Nursery: We’d LOVE to get a sneak peek into what we’re sure is one of the dreamiest nurseries ever to have existed. Throw in a hint of the name in a piece of wall art or in a baby blanket to break the news super nonchalantly. (via Project Nursery)

2. Name Topper ($17): Why not piggyback off of that pregnancy announcement and share the news in a party post with the name as the topper on the cake? Or make it even more exciting and put the name in the cake.

3. Personalized Onesie ($12+): If you really want to treat us, Blake and Ryan, how about a sweet snap of the expectedly adorable newborn in a onesie with her name? Or hey, we’d even settle for just a shot of the onesie.

4. Stylized Sentiment: Or go for the super artsy alternative and set up a photo shoot with all the adorable details about the babe’s birth in a similar style to this adorable announcement. (via By Rosenhoff)

5. Just a Hint: Okay, guys if you’re really set on not giving away the full name, how about at least a subtle hint? Maybe snap a sweet shot of the baby and the letter of her first name to really get everyone making guesses. Oh, how the rumor mill would run wild over this! (via Beba Photography)

What are your name predictions for Blake and Ryan’s baby girl? Share your ideas with us in the comments below!

(h/t Who What Wear, feature image via Dimitrios Kambouris/Getty)