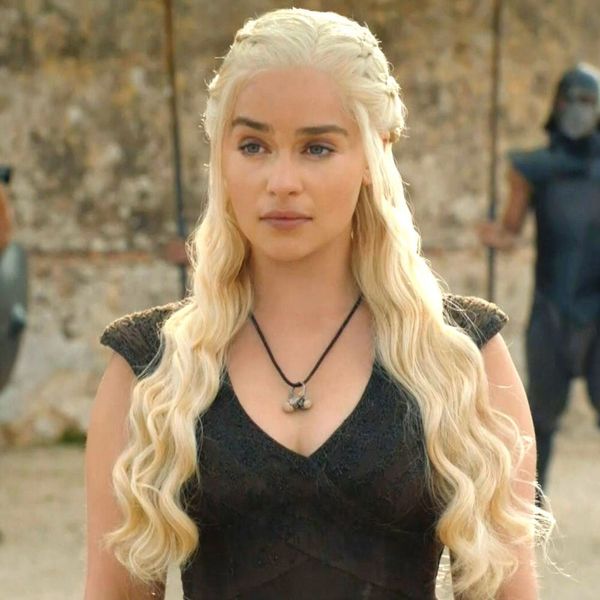 Free of the books, the sixth season of Game of Thrones is full of fast-paced action, huge revelations and oh-so-many dragons. (We’re also not hating that John Snow is dating Ygritte IRL and Khal Drogo sending the Mother of Dragons Instagram love.) But the biggest and best surprise is how the female characters are totally slaying RN, and some fans even predict they may end up leading Westeros when it’s all done. Which got us thinking — with so much girl power going on in GoT, what are the important life lessons all these kickass women can impart to us real-world ladies? Read on for some wisdom from the girls who run the world of Game of Thrones. And a word of warning: SPOILERS LIE AHEAD!

1. Sisters before misters à la Daenerys Targaryen and Yara Greyjoy: While Daenerys has no problem setting the world on fire (literally) all on her own, this past Sunday’s meeting with Yara proves that sometimes sisters helping sisters makes for the most powerful teamwork ever. After Yara explains that men like her uncle Euron only want to make Dany a subservient wife, it’s no wonder the Mother of Dragons chooses to parter with a fellow woman warrior to help her take back Westeros. It was truly one of our favorite #girlboss moments of the whole series.

2. A girl has a name and it’sArya Stark: This season got majorly dark for little Arya, who has spent nearly all her time on GoT pretending to be someone else. Whether it’s posing as a boy from Flea Bottom or being “No One,” she’s fought her true self and nature the whole way in hopes of becoming a kickass assassin. But what she learns is that being and knowing herself was the key to unlocking her innate skills and confidence. Now that’s a killer skill we could all work on.

3. Margaery Tyrell is killing them with kindness: Speaking of unassuming, Margaery is the queen of playing that game, but she uses highly finessed words and knowing how to play her opponents’ weaknesses to scheme her way to success. Sometimes the key to getting what you want is pouring on the sweetness and getting them to think it’s their idea. Also, even though she’s playing the High Septon’s game right now, we all know Margaery is way too sharp to be truly brainwashed. We predict in the finale, we’ll finally find out what kind of game she’s been playing.

4. Lyanna Mormont proves age is but a number: Is Lyanna Mormont with her full-on RBF not the most badass lady on this list? She suffers no fools and has yet to hit puberty! If you’re feeling intimidated because you’re the youngest person in the room, take a page out of this girl warrior’s book by being a pro and owning it. Just remember there’s a strong difference between confidence and arrogance, and you better be ready to back that ‘tude up with action.

5. Know your opponent like Sansa Stark: Fewer women have had a rougher go than Sansa, and as a result, she’s now battle weary AF. But most importantly, she seems determined to not just survive; she wants to win. “You and your advisors — you sit around making plans about how to defeat a man you don’t know. Did it ever occur to you that I might have some insight?” she asks her brother. How many times does a gal get to yell that? But her lesson is real talk: Be prepared, and make sure you’re asking people for advice. You never know what will give you the edge in your own personal battle — whether it’s a job interview or getting a raise.

6. Melisandre teaches us to own your mistakes. The Red Woman Melisandre got taken down a peg this season when her Stannis being Azor Ahai prophecy turned out to be all kinds of wrong, which meant all the terrible things done to boost him to power were for nothing. But after failure totally humbled her back into old crone form, Davos gave her a pep talk that she needed to brush herself off and get back up again, which resulted in the return of Jon Snow. Admit your mistakes, move on and crush it.

7. Sometimes the right man for the job is a woman and she’s Brienne of Tarth. Any woman who’s had to make her way in a man’s world knows the Brienne struggle is real. The Westerosi knight glass ceiling is so hard to shatter that Brienne’s the only one tough enough to try. But not only can she swing that Valyrian steel hard enough to defeat The Hound, but she’s also mentoring young Podrick. Just remember: Anything he can do, you can do better… just like Brienne.

8. Even Cersei Lannister knows family comes first. Last but not least is the fiercest lady of them all. Sure, evil Cersei is in a low place right now, but that also makes her more dangerous, particularly because her enemies are trying to break up her family — and that’s just NOT okay. Cersei is a mama bear, and while she’s no role model in her tactics, her unwavering dedication to family is by far her most admirable quality. And as we all do our own personal climb, that dedication to what’s most important is something we should always put first.

Have other life lessons you’ve learned from Game of Thrones? Tweet them at us @BritandCo!

Annette Cardwell
Annette is the VP of Editorial at Brit + Co. She's a mom of two, a huge girl geek and gamer, a TV snob, and a wannabe chef.
Game of Thrones
Pop Culture
Game of Thrones