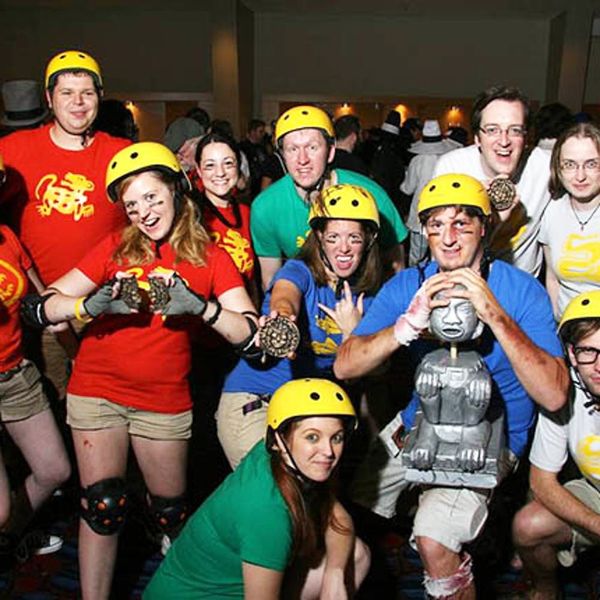 When it comes to creating a killer group Halloween costume, choosing something from the ’90s is usually a sure-win. But with ’90s trends fully back in style (read: choker necklaces, the revival of Delia’s, light-up sneakers, should we go on?) it can be a little hard to tell whether you’re actually rocking a ’90s costume or just normal clothes. This year, we vote you skip the Fresh Prince costume and instead go for one of these group costume ideas that offer just as much nostalgia but with a little extra oomph for your whole squad.

1. Rugrats: With recent talk of a Rugrats revival, the time to dress as your favorite kids’ cartoon is definitely now. Take a hint from Mae Whitman, Sarah Ramos, Alia Shawkat and Michael Angarano and go full ’90s on this thing. (Photo via Funny or Die)

2. Legends of the Hidden Temple: Snag a LOTHT shirt online and then simply throw on a helmet and some shorts to complete the look. (Photo via AC Paradise)

3. Twin Peaks Cast: Is this cult classic actually coming back or not?! Who knows. What we do know for certain is that the characters make for some killer Halloween costumes. (Photo via Welcome to Twin Peaks)

4. Powerpuff Girls: Because who can forget about our favorite adventure-loving ’90s superheroes? Not only is this costume super recognizable, but it’s also really easy to put together. (via Pinterest)

5. Mario Kart: These nostalgic costumes are super colorful, but we’re guessing you’ll have the best Halloween ever most because of those IRL Mario Kart races that are bound to happen. (via Imgur)

6. The Spice Girls: This classic pick is always a winner. However, if you want a fun update to this popular costume, we vote you follow our lead and go for the punny version. (via Brit + Co)

7. Saved by the Bell: Throw it back to some of the best and wildest trends of the ’90s with this fun TV costume. (via E! News)

8. Full House: While the cast of Full House doesn’t have super identifiable costumes, putting on face masks is a silly and easy way to dress up as your favorite ’90s fam. (Photo via @stevie_dee)

10. Toy Story Army Men: Make yourself look like a statue and then suddenly start dancing to really give people a Halloween spook! (Photo via Costume Works)

11. Trolls: There’s a reason this adorable group look has made several of our top costume roundups. Not only is it super easy to coordinate, but you can also include all your friends with bright pops of color from those insane wigs. (via American Apparel)

12. Backstreet Boys: One Direction, you’re great and all, but you ain’t go nothing on this boy band. (Photo via @maperras)

13. Addams Family: If you’re into the spook factor of Halloween, this family costume is a must. (Photo via Costume Works)

14. Wayne’s World: Okay, so technically this is a couple’s costume BUT if you have a third friend who wants to join in on the fun they could totally dress up as Wayne and Garth’s super gorgeous rocker friend Cassandra . (Photo via Brit + Co)

15. The Sanderson Sisters: It’s just not Halloween without a healthy dose of Hocus Pocus. Our favorite Halloween movie comes to life beautifully in costume form, and we can’t wait to give it a try! (Photo via @areized)

16. TLC: So much Halloween win. (Photo via @mamatosha)

18. Ninja Turtles: The good news? An end-of-the-night pizza party is kind of a must with this costume. (Photo via Lizz Aubrey)

19. Clueless: Because what would the ’90s be without this fashionable trio? (Photo via @ayegarrity)

20. Sailor Moon: If you’re looking for a DIY project that’ll take a little bit of elbow grease but not too much, these colorful ladies are the way to go. (Photo via @dcrosswell_)

21. Toy Story: What better way to bring our favorite toys to life than with an epic group costume? (Photo via Pinterest)

22. American Gladiators: Want an epic fitness throwback costume to wear with your gym buddies? Bring back the amazing outfits from this almost-forgotten TV show. (Photo via Costume Works)

23. Care Bears: Not only is this costume super cute, but it’s also one of the coziest options out there. (Photo via See Vanessa Craft)

25. The Wild Thornberrys: How could we ever forget about Eliza and her crazy fam? (Photo via Abroad in Africa)

26. The Craft: If you’re a major fan of the cult classic, pay homage to the movie by dressing up as the main characters. (Photo via @uonewjersey)

Are you dressing up in throwback style this Halloween? Share your ideas with us in the comments below.

Cortney Clift
Cortney is the senior writer and special projects editor at Brit + Co. She typically covers topics related to women's issues, politics, and lifestyle. When she's not buried behind her computer you'll find her exploring New York City or planning her next big adventure.
90s
Halloween Costumes
90s Halloween