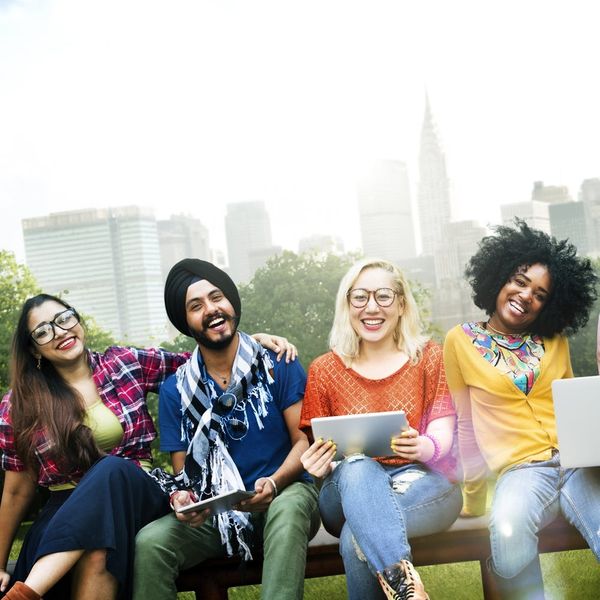 Millennials take a lot of unjustified heat when it comes to everything from their lack of financial foresight, career gumption, real estate savvy… basically anything that apparently earns you respect from elder adults. Despite studies proving that millennials are not only totally motivated, but are in fact a hardworking generation right across the world (even while facing unprecedented hardships passed down from previous generations), the stereotype lives on. If you happened to be on social media over the weekend, you’ll have noticed #HowToConfuseAMillennial taking over streams. While first spewing stereotypes galore, young peeps took over the hashtag to have their say and fight back against what they perceived as bullying b.s.

Though it’s now saturated with “confuse ‘em by voting for Trump” kind of tweets (worth a read, BTW), the hashtag first took aim at young adults with no-holds-barred and groan-worthy attempts at humor….

Put a Trigger Warning on a Safe Space. #HowToConfuseAMillennial

Turn off their autocorrect #HowToConfuseAMillennial

Hand them a job application form

But millennials were NOT having it…

And they fired back…

Complain about this generation being disrespectful & then act like homophobia, racism, social inequality is normal #HowToConfuseAMillennial

#HowToConfuseAMillennial be racist, homophobic, transphobic etc. yet also complain about how this generation is disrespectful

And they just kept it coming…

Baby boomers will tweet #HowToConfuseAMillennial then call us to fix their internet problems 30s later pic.twitter.com/hLt9KLjoCc

*as long as they aren't passionate about art, writing, or anything creative#HowToConfuseAMillennial

Steer them away from majoring in the humanities, then complain they don't read. #HowtoConfuseaMillennial https://t.co/iOWccrOfnw

Tell them mental health is important while they run between three part-time jobs. #HowToConfuseAMillennial

Do you think millennials are unfairly stereotyped? Tweet us @BritandCo!

Desiree O
Desirée O is a ‘Professional Bohemian’ who loves anything and everything related to the arts, entertainment, and pop culture. She ADORES being a ‘Newsy’ for Brit + Co, covering all of the latest tidbits of awesomeness that you want to read about. When she’s not writing, she’s either making messy art, going on long adventurous walks with her camera, or poking around over at bohemianizm (http://www.bohemianizm.com/). You can find out about Desirée O and her work at http://DesireeO.com/ or follow her on Twitter @DesireeO.
twitter
Pop Culture
twitter
More From Pop Culture