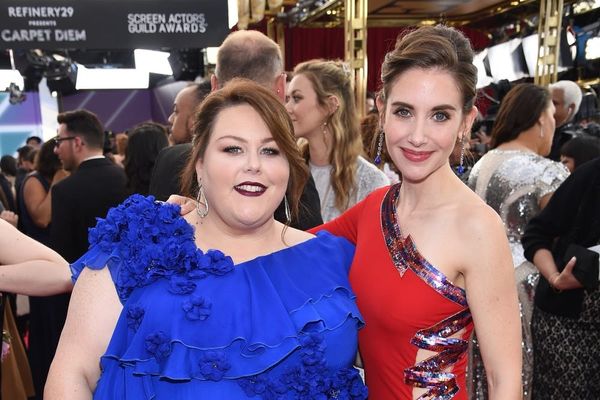 The 2019 Golden Globes were largely positive and celebratory, sprinkled with meaningful acceptance speeches and funny moments. But on the red carpet before the show started, reports surfaced that This Is Us star Chrissy Metz had said some less-than-kind words about Alison Brie — a rumor that both women are firmly shutting down.

“Nothing but love for @chrissymetz!!” Brie, who was nominated for her first-ever Golden Globe for GLOW, captioned an Instagram story photo of her with Metz on the red carpet. “Rumors can’t keep us down!”

Earlier in the evening, it was reported that Metz might not have realized that her mic was still on following an interview on the official Globes Facebook Live red carpet stream. Several outlets reported that she allegedly said of Brie, “She’s such a b**ch,” but many other people heard something closer to “She’s so sweet” or “She’s such a babe.”

Metz quickly addressed the rumors, taking to Twitter during the Globes broadcast to slam the reports that she had insulted Brie. “It’s terribly unfortunate anyone would think much less run a story that was completely fabricated!” she wrote. “I adore Alison and would never say a bad word about her, or anyone! I sure hope she knows my heart.”

According to People, a rep for Metz also denied the rumor in a statement. “Chrissy never said that. She would never say that about anybody,” the rep told the mag. “She’s a huge fan and friend of Alison Brie.”

Later, Metz presented the award for which Brie was nominated, but it went to Rachel Brosnahan for The Marvelous Mrs. Maisel.

According to Vanity Fair reporter Nicole Sperling, Brie was confused by the reports when she was asked about them inside. “But why? I know her,” Brie reportedly said. “I saw her on the carpet and I told her how beautiful she looked.” Obviously, the confusion didn’t last long, and the two women happily put the rumors to rest.

What did you think of the Chrissy Metz/Alison Brie Golden Globes “drama”? Let us know @BritandCo.