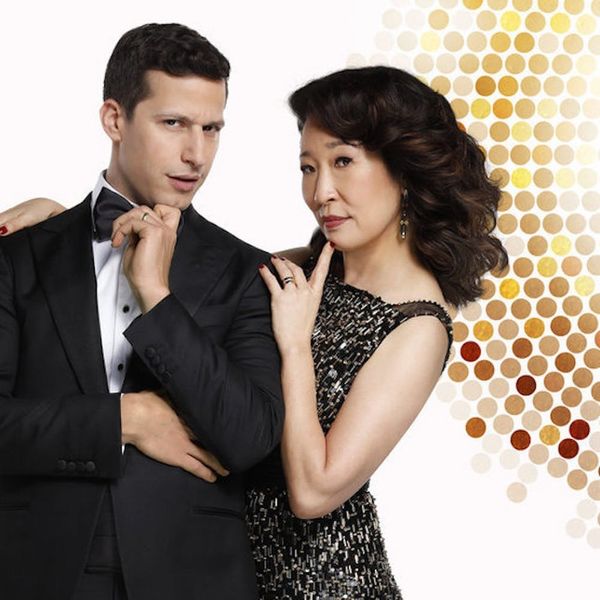 Sandra Oh and Andy Samberg are ready to take the Golden Globes by storm. The two recently sat down on Today to chat about their historic co-hosting gig, which came about after they made a memorable appearance presenting at the 2018 Emmys.

The job is particularly significant for Oh, who will be the first person of Asian descent to host the Golden Globes. (She’s also nominated for an award for her work on Killing Eve.) Oh told Today that when she first received the offer, she was hesitant to accept. Ultimately, though, she decided to take the job — not just for herself but for her community. “I couldn’t say no just because I was scared,” she explained.

Once they committed to the gig, they had to make a few other big decisions, such as how deeply — if at all — they wanted to get into politics. Last year’s ceremony took place at the height of the #MeToo and #TimesUp movements, and Oh and Samberg are aware that both are still on people’s minds in 2019.

“There’s so much political comedy and so much great political comedy,” Samberg said, “that I don’t necessarily think we need to be like, ‘WE’RE GOING TO DO THIS NOW FOR THE FIRST TIME!'”

“There was change last year,” Oh added. “There is change this year. The thing that I’m really interested in is to find some joy, you know, because we need it.”

One source of that joy is the pair’s newly created “best friend handshake” — a vast improvement on their first attempt — which they’ll hopefully put to good use when the 2019 Golden Globes air Sunday, January 6, at 8pm ET/5pm PT on NBC.

Are you excited to watch Sandra Oh and Andy Samberg host the 2019 Golden Globe Awards? Let us know @BritandCo!

Desiree O
Desirée O is a ‘Professional Bohemian’ who loves anything and everything related to the arts, entertainment, and pop culture. She ADORES being a ‘Newsy’ for Brit + Co, covering all of the latest tidbits of awesomeness that you want to read about. When she’s not writing, she’s either making messy art, going on long adventurous walks with her camera, or poking around over at bohemianizm (http://www.bohemianizm.com/). You can find out about Desirée O and her work at http://DesireeO.com/ or follow her on Twitter @DesireeO.
Awards Shows
Pop Culture
Awards Shows Golden Globes