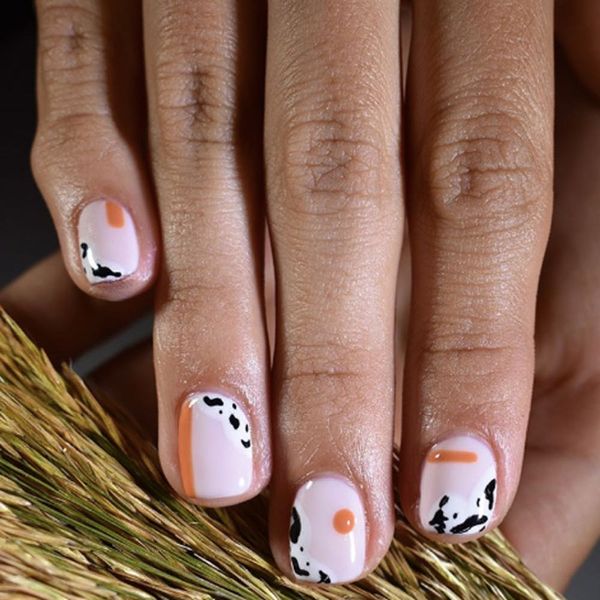 There’s nothing like a fresh mani to top off any #OOTD. But, with so many nails colors and designs to choose from, how’s a girl to know which polish to pick? Don’t let endless options stress you out. In this series, we’re diving deep into top nail trends to teach you how to DIY and provide color and inspiration along the way.

Take one scroll through Instagram and it’s clear to see: Animal print nails are having a major moment. Where minimalistic, single-shade manicures featuring negative space and inverted French tips have dominated the nail scene for what feels like far too long, this fall it’s all about embracing the wild side. If you fancy leopard, zebra, or even cow print, achieving the fierce finger look is a lot easier than you might imagine.

Creating zebra and cow tips is as simple as a few lines and misshaped dots, but leopard designs require a bit more technique. “To create your own, choose any solid base and drawn out the letter C with a thin art liner brush,” Melissa Samuel, a nail artist and manager at Wild Oleander, a nail salon in Brooklyn, says. “They should be evenly spaced throughout the nail. Start in the middle, then go over these ‘C’ shapes slightly thicker and without creating a solid outline. The idea is that they are not symmetrical yet still cohesive. Some can even be slightly broken.” Once you create all of your C’s, paint a small dot in between the gaps to bring your animalistic mani to life. Top it off with your favorite topcoat and snap a pic for the ‘gram.

Whichever animal print you decide to rock, you have options with how to tie it into your nail polish masterpiece. Ahead, sneak a peek at some of our favorite designs and color combos circulating social media. By the end, you’ll be gearing up to give your very own DIY a try.

Do you love animal print nails?Tell us @BritandCo!

Rebecca Norris
Rebecca Norris is the Beauty Editor at Brit + Co. With a New York apartment that looks more like a Sephora than a home, she's just as quick to roll up her sleeves to swatch all the best bold lipsticks, as she is to hop in a dermatologist's chair to review a vampire facial. After all, anything in the name of a good story, right?
Nail Art Designs
Nails
Nail Art Designs Nail Polish Pretty Polished
More From Nails