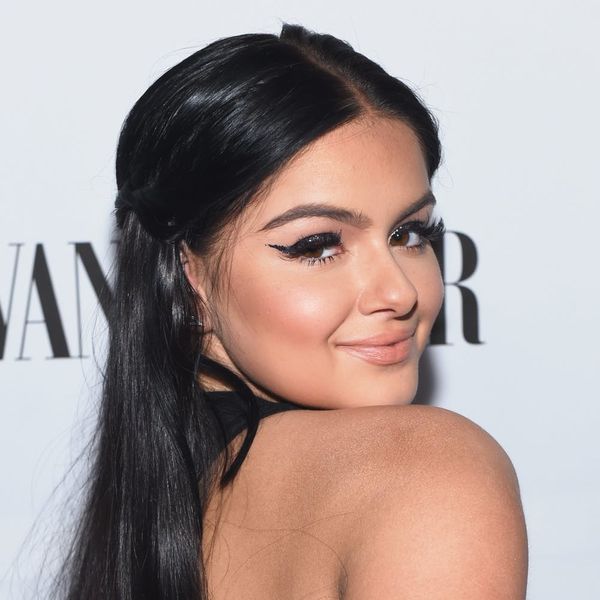 In case you didn’t get the memo the first time around that Ariel Winter, who gracefully shut down haters when they criticized her for her wardrobe choice at a Modern Family panel in May, is NOT here for your judgement, the sitcom star is here to say it again, louder and clearer than ever before.

Winter took to Twitter to make it known that she’s sick of the hateful comments that frequently appear on her social media pages regarding her outfit choices, and to let everyone know that she wouldn’t be changing for them anytime soon.

The post came several days after the young star posted a shot of herself with pals while donning a lace cropped bralette and black shortie shorts. It wasn’t long before the hate started rolling in, with people telling her she looked like a “hooker,” and making mean comments about her weight in comparison to other young ladies in the photo.

Several days earlier, it was a similar story with a snap she uploaded of herself in some Daisy Dukes and cowboy boots with a pink tie-front cropped blouse. “Just pose for Hustler already,” one person wrote, with another claiming she was “desperately seeking attention.”

Addressing those who would say she’s “squeezing into” her shorts, or that her clothing choices make her unchaste, Winter had some choice words for her online bullies. “It’s SUMMER. Get over it,” she wrote. “It’s hot, I’m obviously going to wear minimal clothes. I’m not going to suffer in a turtleneck to please anyone.” Girl, PREACH.

More than simply clapping back, however, Winter pointed out how troubling it was that she even had to respond to such an issue as a 19-year-old woman, and TBH, she has a very good point. “Also, I’m not “squeezing into” anything,” she quipped. “My shorts fit me and everything I’m doing is just fine. Please leave young women alone. We’re just living our lives. It’s really troubling that we even have to deal with this stuff nowadays.”

The plea is especially troubling coming from Winter, who has been plenty open about her struggles with body image in the past, prior to undergoing breast reduction surgery. “Before then, I didn’t like myself, and everyone was so focused on my cleavage, so when I got the breast reduction, it helped me feel so much better about my body,” she told Glamour back in 2015.

While she says things have “gotten a little better” in the self-love department since then, the types of comments she’s referencing certainly can’t help matters.

Still, we’re proud to see her standing up for herself, and hope that maybe, just maybe, it will make someone think twice about how they choose their words. Stay strong, BB!

Do you think Ariel has a point? Tell us over @BritandCo.

Nicole Briese
Nicole is the weekend editor for Brit + Co who loves bringing you all the latest buzz. When she's not busy typing away into the wee hours, you can usually find her canoodling with her fur babies, rooting around in a bookstore, or rocking out at a concert of some sort (Guns N' Roses forever!). Check out all her latest musings and past work at nicolebjean.com.
Body Positive
Celebrity News
Body Positive Controversy
More From Celebrity News