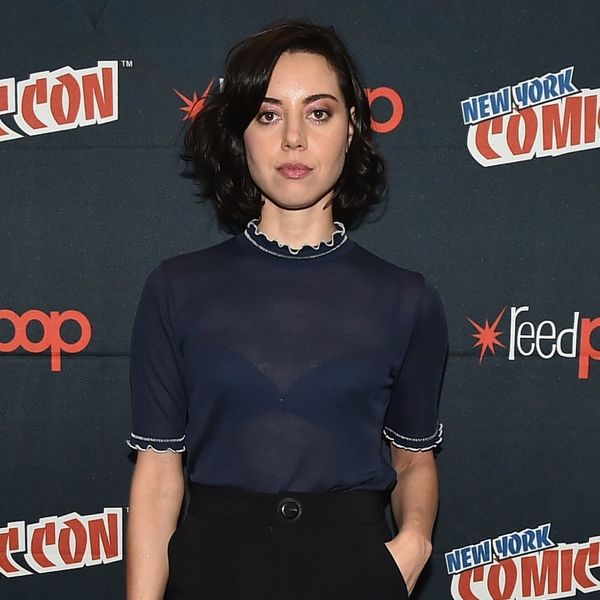 The actress, who is starring in the Matt Spicer-directed dark comedy Ingrid Goes West, attended the Sundance premiere in a ribbed sweater dress with Wolford tights — and a gorgeous new ronze (that’s red and bronze) bob. For anyone who isn’t quite ready to go whole hog on the ginger shade, this in-between color is the perfect one to try.

If you’re not sure how red you can go, Tiffanie Richards, Colorist at Nunzio Saviano Salon suggests, “For natural brunettes with a more olive skin tone, it would be in your best interest to stay within a darker shade like Aubrey’s copper brown, and for those with a lighter skin tone to near toward a lighter tone of copper. For beginners to go red, you can start by adding a copper gloss to your already brunette hair to get just a sheen of red in certain lighting or adding very subtle natural red highlights. Key word here is subtle. This is a very natural look and reds and coppers tend to look the most flattering when in a natural form.”

The Mike and Dave Need Wedding Dates star has been in an experimental mood with her hair lately. At the Winter TCA Tour in Los Angeles, Aubrey rocked a chestnut brown color. This gradual lightening of her hair color over time might have gone unnoticed to the untrained eye, but it’s what every hair colorist recommends when taking dark hair to light.

As for Aubrey, she’s nearly unrecognizable from the dry-humored intern-turned-Deputy Director of Animal Control from her Parks and Recreation days. April Ludgate who?

What do you think? Does Aubrey do Ronze well? Tweet us @BritandCo!

Love Moore
Love Moore is a freelance writer based in Brooklyn, New York. She has a BA in journalism and loves homemade meals, snow days and bookstore corners.
Hair
More From Hair