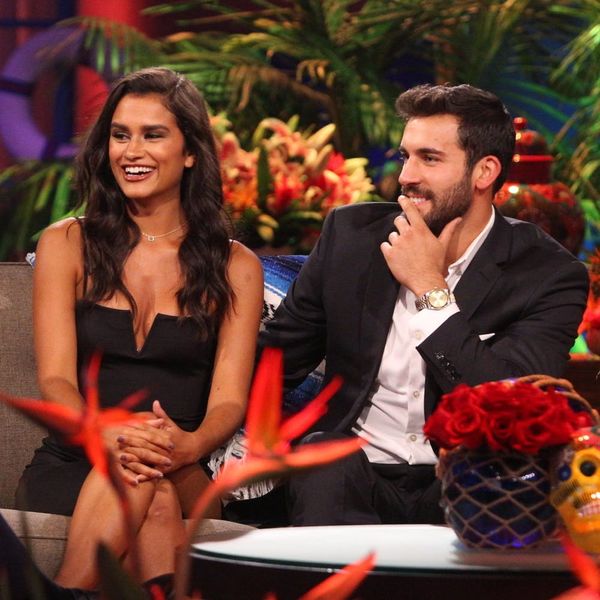 It is painful for me to come to terms with the fact that the chance at finding true, eternal, everlasting love on TV has ended… at least for the summer. After a tumultuous beginning and an endless rehashing of the controversy between Corinne Olympios and DeMario Jackson, which began brewing before the show even began on Bachelor in Paradise, the season of l’amour has come to a close in a climax of heartbreak… plus one “surprise engagement!” (I love surprises!)

Last week’s episode had Chris Harrison informing our poor wretches that it was their final day in Purgatory (UGH), meaning that they would soon face their ultimate reckoning. Read on to find out how all our couples fared.

Jack Stone and Christen “Scallop Fingers” Whitney: Stone made it clear to Whitney (AKA Scallop Fingers) that he wanted to pursue a relationship with her outside of Purgatory, but she wasn’t exactly feeling it. Apparently, the former saw hot carnivorous love where there was only pescatarian intrigue! Womp, womp.

Jonathan “Tickle Monster” Treece and Jasmine Goode: Though these two shared a hot make-out sesh in the pool, it ultimately didn’t lead to everlasting love, with Treece suggesting they should leave things at “the friend level” and Goode agreeing.

Dean Unglert and Danielle “D-Lo” Lombard: Our once favorite baby bro crushed Schulman to bits in order to keep making out with D-Lo, but realized that he’d made a huge mistake in letting her go. Unfortunately for him, it was too little, too late, and his fall from America’s sweetheart to America’s least favorite “f***boy” was complete when D-Lo revealed that he had hooked up with her shortly after he confessed his feelings for Schulman. His would-be love was not impressed, saying, “Enough is enough.”

DeMario Jackson and Corinne Olympios: Look, y’all, I don’t know what the right way was to handle the situation between these two, but ABC’s endless interviews between them, culminating in an awkward joint interview, have been the absolute worst. Still, we’re happy to see that the two could remain cordial, wishing each other the best.

Adam “The Ventriloquist” Gottschalk and Raven Gates: Somehow, this Batman villain (AKA “The Ventriloquist”), got all the way to the end with BiP MVP Raven…. and beyond: The couple is apparently still together and in love! “Everyone needs an Adam,” Gates gushed during the finale. If you say so, girl! In fact, she wants him to meet her parents, and SURPRISE, they’re on hand to do just that at the reunion.

Diggy Moreland, Dominique Alexis, and Jaimi King: Things were pretty hot for a minute between Alexis and Moreland, but the playboy eventually tells her they’re through, because he’d rather be with King. It doesn’t “play” to his favor, however, with King, a noted bisexual, rebuffing his advances. So many broken hearts in this throuple! Sigh.

Robby Hayes and Amanda Stanton: Hayes’ dogged pursuit and glow sticks in the pool ultimately weren’t enough of a romantic gesture for Stanton to want to pursue a lasting relationship. While the two dated briefly in Purgatory, they reveal that they are no longer together, with the Twins accusing him of stepping out with another woman. And to think what a well-coiffed stepdad he could’ve been to her children! Love really is dead.

Daniel Maguire and Lacey Mark: Or is it?? After heading to the Fantasy suite together, it seems like these two might just make it after all. Except it turns out that Maguire was just turning on the romance for the cameras, with no real interest in dating Mark post-Purgatory. Oof!

Derek Peth and Taylor Nolan: Despite some initial drama with this pairing, it’s been smooth sailing ever since. So smooth, in fact, that they had a big surprise for us all: They’re engaged! Will this show ever stop throwing out surprises that shake the foundation of this sterling franchise?

With 29 contestants having left Purgatory with broken hearts, it’s good to know that, for the most part, Paradise CAN really work, y’all!

What did you think of the BiP finale? Tell us over @BritandCo.