Bachelor Mansion Is Reportedly Burning Amid the Devastating California Wildfires 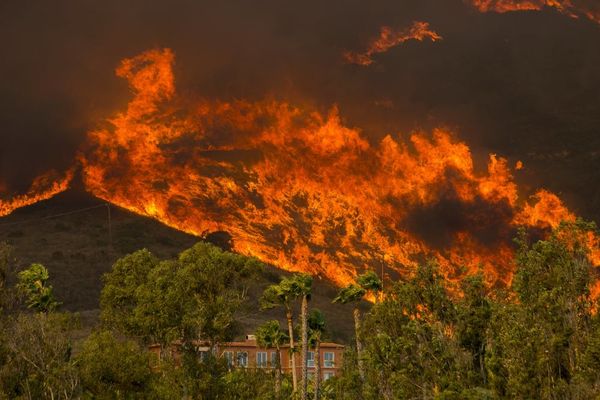 The famed Bachelor mansion, which has been the backdrop of hundreds of limo entrances and rose ceremonies over the years, is reportedly burning amid the devastating wildfires in California. According to the Hollywood Reporter, which cited sources, the flames are moving from the back patio toward the house, and the lower house, often used by the show’s production team, has already been destroyed.

Bachelor creator Mike Fleiss tweeted about the situation on Friday, November 9, sharing a photo of the smoke from the fires and writing, “Pray for Malibu — and #TheBachelor Mansion.” Rob Mills, ABC’s SVP of alternative programming, also reportedly tweeted that the house was “in grave danger.”

The iconic residence is located in Agoura Hills, which is right in the path of the Woolsey fire. According to the Los Angeles Times, the blaze has already destroyed homes in Oak Park, Thousand Oaks, and Bell Canyon, and people in Malibu and Hidden Hills were told to evacuate Friday afternoon, too. Thousands have been forced to flee — and the fire is still growing.

Earlier on Friday, the official Twitter account for the Santa Monica Mountains National Recreation Area shared that another Hollywood landmark had been destroyed by the flames. “We are sorry to share the news that the #WoolseyFire has burned Western Town at #ParamountRanch in Agoura,” the account tweeted. “We do not have any details or photos, but it is our understanding that the structures have burned. This area is an active part of the incident and we cannot access it.”

The Woolsey fire is one of three wildfires wreaking havoc and devastation throughout California. A second fire in Southern California has spread over 6,000 acres since starting Thursday afternoon, according to CNN, and a third fire, this one in Northern California, burned an estimated 70,000 acres, killing five people and destroying as many as 2,000 buildings.

Firefighters are working to contain all three blazes. Our thoughts are with them and everyone else affected by the fires.

If you’d like to help the victims of the California wildfires, several local organizations have relief funds in place. In certain places, you can also donate items such as toiletries, bedding, and food.