Barack Obama Is Now More #DadGoals Than Ever 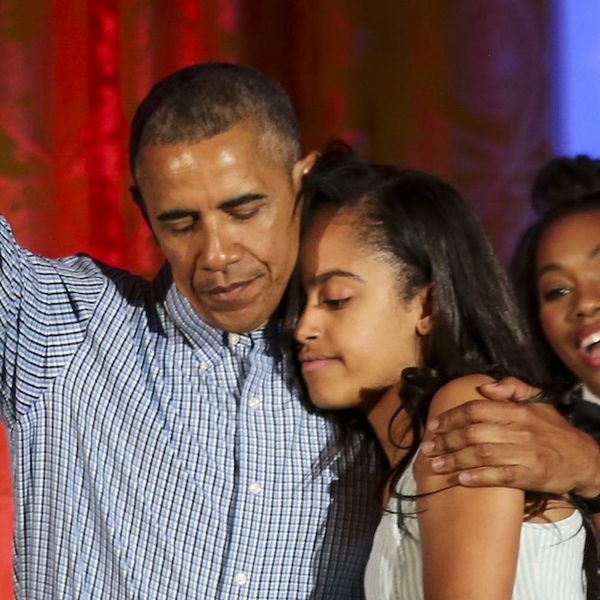 Barack Obama has always been super vocal about how much his daughters Sasha and Malia mean to him. In his tear-jerking farewell speech as President, he told them that of all he’d done in his life, he was most proud to be their dad, and he makes a habit of talking in interviews about how proud they make him. Not to mention, he obviously LOVED making them laugh (see: embarrassing them) with his dad jokes at the White House turkey pardon every year.

But if you thought you saw Obama at peak dad before, his post-Presidency #DadGoals evolution is even BETTER.

Obama's on vacation with the hat backwards. He's never coming back. pic.twitter.com/RUakcwwgtT

After returning rested and relaxed, Obama spent a weekend in the city with Malia, who’s currently living in NYC as she completes an internship with big-time producer Harvey Weinstein. The two went for dinner and tiramisu at a cozy Italian spot called Emilio’s Ballato, and later, they took in a Broadway play, where they mingled with Mark Ruffalo and Danny DiVito — as dads do.

While we don’t doubt that Obama is still very much the goofy dad who loves to annoy his daughters with bad puns, it’s awesome to see the father-daughter dynamic evolve and mature as Malia and Sasha grow up and gain independence. That it’s happening at the same time as Obama’s ability to enjoy a somewhat more relaxed public life makes it all the better.

Being an amazing dad as well as partner to wife Michelle remain part of the solid foundation that still supports Barack Obama in being an inspirational leader for the US — President or not.

Do you think Barack Obama is as much a leader now as ever? Let us know @BritandCo.