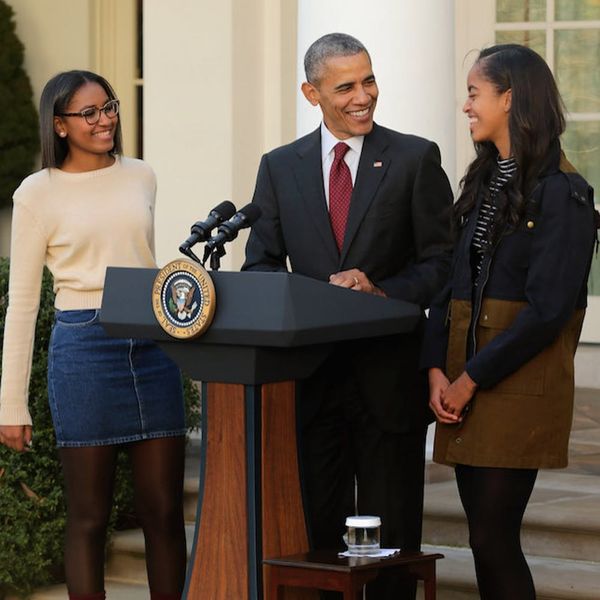 In the weeks leading up to Trump’s Inauguration, Barack Obama wrapped up his time in the White House admirably, delivering a tear-jerking farewell speech that really underlined his love and respect of his wife Michelle and their daughters, Sasha (who had to miss the speech because of an exam — annoying!) and Malia (who just nabbed an internship with a famous Hollywood producer). Obama recently spoke of his girls once more during his final press conference, addressing something he hadn’t publicly done before — just how exactly his two teen daughters were dealing with President Trump’s win.

The Obamas were, of course, committed to the democratic peaceful transfer of power to Trump, despite endorsing Hillary Clinton during her run (with Michelle even giving many impassioned and inspiring speeches during the campaign). When, during the final press conference, LA Times reporter Christi Parsons asked Obama how he and Michelle talked about the election results with their daughters, Obama said something that we can’t get out of our heads.

“They paid attention to what their mom said during the campaign and believed it, because it’s consistent with what we’ve tried to teach them in our household, what I’ve tried to model as a father with their mom, what we’ve asked them to expect from future boyfriends or spouses,” he said after bluntly admitting that Sasha and Malia were indeed disappointed with the election results.

“They don’t mope,” he added. “What makes me proudest about them is that they also don’t get cynical. They have not assumed that, because their side didn’t win or because some of the values they care about don’t seem as though they were vindicated, that somehow automatically, America had somehow rejected them or rejected their values.”

That doesn’t mean they won’t stand up for their beliefs: Just last week, for instance, Malia joined protesters standing up against the Dakota Access Pipeline. As she and Sasha ease back into life as private citizens, we can’t wait to see how these strong characteristics manifest into more.

Do you think Sasha and Malia have handled the election well? Let us know over @BritandCo.