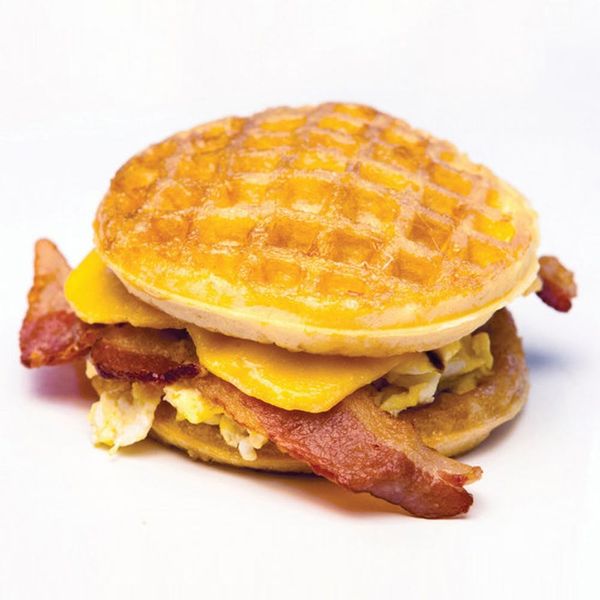 If bacon isn’t your favorite food, then #gtfo. Because bacon is seriously the greatest — you can have it for breakfast, lunch, dinner and even dessert (hello, bacon + beer cake). Check out these killer bacon recipes to get your bacon fix.

1. Bacon Guacamole Grilled Cheese: This is not a drill. You’ll never settle for ordinary grilled cheese again after tasting this flavorful guacamole and bacon combo. (Photo via Gabby Phi)

2. Peanut Butter Bacon Sandwich: Sorry, jelly. Peanut butter is the real winner when combined with bacon in a sandwich. (Photo via Christin Urso)

4. Bacon Espresso Pudding Shots: Yes, bacon can get you drunk. Try one of these bacon espresso pudding shots for a Monday Morning pick-me-up. (Photo via Analiese Trimber)

5. Bacon Fat Biscuits: Pretty damn southern. Take comfort food to the next level with these biscuits made with bacon fat. (Photo via Mimi Takano)

6. Caramelized Nectarines With Bacon: These caramelized nectarines topped with bacon will satisfy you with a perfect blend of salty and sweet. Serve with ice cream for a little something extra. (Photo via Analiese Trimber)

7. Browned Butter, Bacon and Butterscotch Chip Ice Cream Sandwich: Forget the ice cream truck — make this instead. No promises that it won’t melt in your hand. (Photo via Annie Trimber)

8. Bacon Fat Doughnuts: Has there ever been a better pair? No. Just when you thought donuts couldn’t get any better. (Photo via Mimi Takano)

9. Egg, Bacon, Cheese + Waffle Sandwich: Pouring syrup over your waffles is so last year. These waffles are cooked IN maple syrup. (Photo via Spoon University – Northwestern)

10. Bacon and Egg Toast Cups: Wake up flawless. We just made breakfast effortless by letting all your favorite breakfast staples – bread, egg, bacon – cook at once into an epic cup. (Photo via Spoon University)

11. Peanut Butter Bacon Banana Bites: Snack time, anyone? Your favorite childhood combo of peanut butter and banana just got so much better. (Photo via Annie Trimber)

12. Maple Browned Butter Bacon Cupcakes: This combination of the gods makes for the perfect fall treat. (Photo via Kelda Baljon)

13. Bacon-Wrapped Dates With Goat Cheese and Rosemary: Talk about an appetizer. Or maybe we’ll just double it and make it dinner? (Photo via Spoon University – Northwestern)

14. Bacon, Egg + Cheese Potato Pancakes: Made from leftover mashed potatoes, perfect for the morning after a big dinner. (Photo via Carrie Eager)

15. Bacon Pancakes: Savory and sweet, the bacon fat gives it a little extra kick of flavor. (Photo via Kelda Baljon)

16. Bacon, Sausage, Cheese and Tater Tot Breakfast Bake: Lots o’ tots. Step up your game and bake your way to the breakfast of champions. (Photo via Tiare Brown)

18. Bacon Fried Rice: Bacon with an Asian flair… because everything tastes better when you eat it with chopsticks. (Photo via Mimi Takano)

20. Corn, Bacon and Jalapeño Salad: BBQ ready. An easy dish for your next picnic. (Photo via Annie Trimber)

23. Bacon Jalapeño Cream Cheese Poppers: Get the party started. Because anything stuffed in a crescent roll is instantly more delicious. (Photo via Celeste Holben)

25. Sriracha, Bacon + Onion Burger: Load it up, load it up, watch it all pour out. With Sriracha. (Photo via Kirby Barth)

26. Caprese Chicken With Bacon: Add a little Italian flair to your bacon. (Photo via Annie Trimber)

27. Roasted Brussels Sprouts With Bacon: What better way to eat your veggies? The crispy bacon gives texture to the tender, caramelized sprouts and adds a savory depth of flavor. (Photo via Kelda Baljon)

Do you have any other epic bacon recipes? Let us know in the comments!

Spoon University
Spoon University is a food network for our generation, where all the content is produced by college students. They cover everything from simple recipes and local restaurants to dining hall hacks and healthy living tips.
Cookie Recipes
Recipes
Cookie Recipes Pancake Recipes
The Conversation