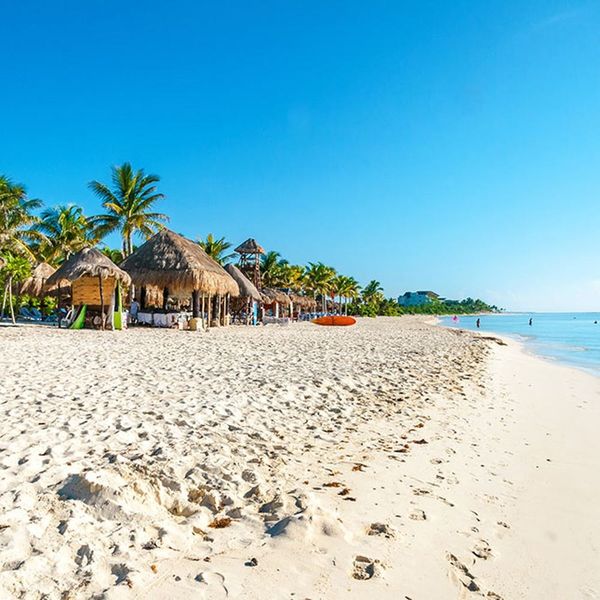 Whenever a friend takes a trip to Mexico, it seems like they’re inevitably heading for Tulum. Tulum has become the Coachella of vacations south of the border, but it’s time to chart a new course. Countless Instagram posts chronicle this city’s allure from tropical oasis to hipster paradise, and while this combination of beach and scene is unquestionably appealing, it’s hardly unique. Mexico is home to plenty of lesser-known, equally vacation-worthy cities across the country. From the cenotes of the Yucatan to the tequila tours of Guadalajara, here are 10 breathtaking destinations to visit in Mexico.

1. Oaxaca: With a bustling downtown elegantly blending centuries of Mexican history (from pre-Hispanic to modern, colonial to contemporary), this southwestern capital city is a UNESCO World Heritage Site. Oaxaca’s combination of colorful, Baroque architecture amidst neon lagoons and pre-Columbian ruins is a design-lover’s dream and — naturally— an Instagram-lover’s idea of heaven too.

2. Merida: The capital of the Yucatan, Merida was nicknamed “The White City” early in its history because most of its buildings were white, as was the customary clothing worn by the city’s inhabitants. Today, Merida’s charm lies in its pastel architecture and tree-lined plazas. The local markets are a must-visit, as is a trip to nearby ancient Mayan city Uxmal, where the Magnificent Pyramid of the Magician is as magnificent as the name suggests. After a morning among Mayan ruins, a visit to the MACAY, the Museum of Contemporary Art, provides a nice counterbalance from ancient to contemporary in a single day.

3. Chichen Itza: A short drive from Merida, this pre-Columbian city is one of the New Seven Wonders of the World. Book a guided tour with renowned guide Alberto Cabrera (known as Beto) at Cancun Passions to learn about Mayan culture and history and their astoundingly accurate astrological predictions. Beto’s seemingly infinite knowledge of pre-Hispanic Mexico (and impressive ability to pun in two languages) brings the world of the Mayans to life — not an easy feat after so many centuries. A dip in the underground river of Cenote Ik-Kil, just minutes away from Chichen Itza, is a refreshing way to end your day.

4. Cancun: Cancun isn’t just for spring break anymore. Book a stay at Panama Jack Resort to get away from reality (and the partying crowds). Stretches of white sand beach border the Caribbean Sea, its aqua water rivaling that of Turks and Caicos. The best part? The resort gives back to the local community: a food and clothing drive is located in the lobby, and a gingerbread house celebration is held every Christmas for local children with little resources or terminal illnesses.

5. Playa Del Carmen: Originally a fishing port of Chichen Itza, Playa del Carmen is a perfect mix of its neighboring cities. This town on the Riviera Maya is less trendy than Tulum and less touristy than Cancun, making it an ideal destination to experience the charm of Mexico’s East Coast. No offense to Cabo-fanatics, but you can’t beat that Caribbean Sea.

6. Mexico City: Trade the Mayans for the Aztecs and head west for the nightlife, restaurants, and museums of super trendy Mexico City. But just because you’re not on the Caribbean, don’t assume you’ll be landlocked. Take a boat ride along the canals, man-made islands, and floating gardens in the borough of Xochimilco. Everything you could ever want will be floating by on canoes: cervezas, micheladas, flower crowns, and endless tortillas.

7. San Cristóbal de las Casas: Tucked away in a small valley surrounded by the Chiapas Highlands, San Cristóbal is a (literal) hidden gem, unique for its indigenous culture and colonial architecture. The bustling town square often features live music and native dancing, and villagers clad in Mayan textiles sell folk art and hand-made crafts. At sunset, lights illuminate the Baroque facade of the centuries-old San Cristóbal Cathedral. Take a day trip to explore the jungle ruins and waterfalls or a coffee tour to support local farmers.

8. Guadalajara: Another must-visit destination is in the Mexican state of Jalisco, the birthplace of tequila. Embark on a tequila tour from the capital city of Guadalajara to the volcanic valleys of the aptly-named town of Tequila, where the landscape of blue-gold agave fields alone is worth the trip; the west-central plains are lined in blue and gold all the way from the Tequila Volcano to the Rio Grande.

9. Valle de Guadalupe: Leave the agave fields behind for the vineyards of the Valle de Guadalupe. Though Mexico’s burgeoning wine country in Baja California is home to hundreds of vineyards, the region was something of a well-kept secret. But Mexican wine has gained more recognition in recent years, and high-end eateries are popping up all over the region in response. Watch out, Napa.

10. Cabo San Lucas: This list wouldn’t be complete without a mention of Cabo San Lucas. The luxurious getaway on the Pacific is a haven for whale watching and, of course, celebrity watching too. The scene of countless episodes of The Hills and Laguna Beach, Cabo was also the destination for Gwyneth Paltrow’s recent bachelorette party. If it’s good enough for Goop, it’s good enough for us.

What are your favorite spots in Mexico? Tweet us your top picks @BritandCo.

Katherine Parker-Magyar
Katherine is a freelance writer focusing on travel, culture, lifestyle, and politics. Her work has appeared in The Week, Tasting Table, Elite Daily, POPSUGAR, and Electrify, among other publications. She's traveled to all 50 states and 40 countries, but calls New York City home. Follow along on Instagram at @katherineparkermagyar or visit her website at www.katherineparkermagyar.com.
Travel
Travel
Travel Vacation