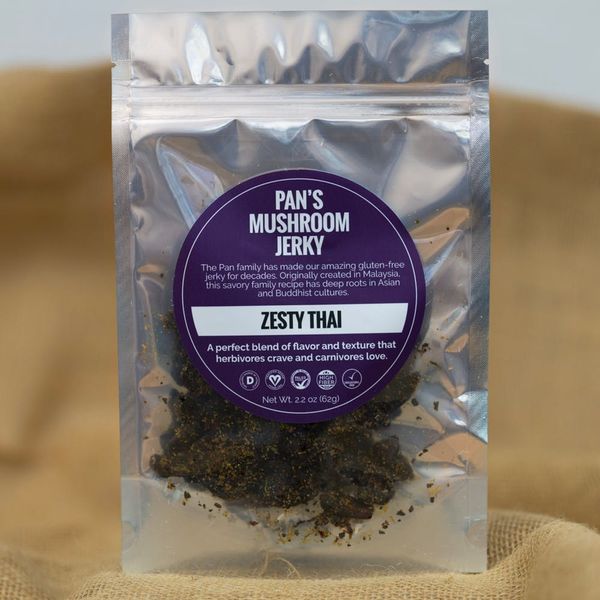 Grass-fed, organic, hormone-free beef jerky has been a big health trend over the past few years, but now companies are taking jerky in a different direction: meatless. With options like soy, mushroom, eggplant, and coconut, these new plant-based jerkies are more sustainable for the planet, lower in calories, and more accommodating to a wide range of lifestyles, from vegan to Paleo. Here are three of our favorites.

On a visit to see family in Malaysia, Michael Pan discovered the secret to his vegetarian Buddhist relatives’ happiness: their family recipe for mushroom jerky. Made of shiitake mushroom stems, Pan’s Mushroom Jerky tastes shockingly like beef jerky. When we tried the Original flavor, we could’ve sworn it was actually Chinese beef jerky, thanks to its texture, which resembles shredded, dried beef. It has an earthy flavor, warmed up with the addition of a proprietary blend of spices, as well as a sweetness from brown sugar. The Zesty Thai flavor, which is vegan and certified Paleo Friendly, is slightly chewier, with a smokier aroma. Both have the satisfying bite of a real meat jerky, and they’re both soy-free.

Eggplant lovers will enjoy Little Red Dot Kitchen’s Eggplant Baconess, which is made by oven-roasting thinly sliced eggplant with smoked paprika, brown sugar, and chili pepper for some kick.

Coconut chips have taken the world by storm, so it only makes sense that coconut-based jerky is next. Cocoburg is made from young coconut meat, and is Paleo, vegan, raw, non-GMO, gluten-free, soy-free, and USDA organic. It comes in three flavors: Original (peppery with a hint of coconut flavor), Ginger Teriyaki (which has an addictive sweetness that makes it a crowd-pleaser), and Chili Lime (a Thai-inspired blend made with jalapeños, garlic, and lime juice). Can’t choose? Grab a sampler pack of all three.

Have you tried and loved any meatless jerky products? Let us know your thoughts @BritandCo.

Susannah Chen
Over the past decade, Susannah Chen has been a writer and content creator for POPSUGAR, Lifehacker, Eater, Zagat, Williams Sonoma and more. When she's not cooking or writing, she's on the hunt to find the world's best chilaquiles.
Healthy Essentials
Food News
Healthy Essentials Healthy Living Online Shopping Shopping
The Conversation