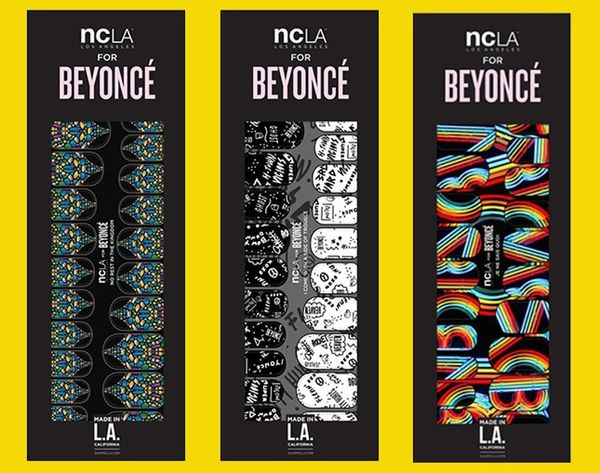 It’s official: we’re dubbing 2014 “The Year of Beyoncé.” From the secret album to the epic “On the Run” tour, the superstar just keeps blowing our minds. Now it looks like Bey is no longer just outfitting your ears, but also your nails.

1. I Come With a Side of Trouble ($18): This black and white combo features the entire track listing of her 2014 namesake album. The monochromatic design also incorporates notable lyrics into the scribble design.

2. No Rest in the Kingdom ($18): This jewel toned mosaic pattern is meant to to mimic the bling-tastic Tom Ford bodysuit Beyonce wore during her iconic 2014 VMA performance where she was awarded the Michael Jackson Video Vanguard Award. These nail wraps actually have a texture to them so you can actually feel the bumps, each color is a stone.

3. Je Ne Sais Quoi ($18): This neon design is based on the similarly colored signs from her “Blow” video. Lisa Logan told People, “When the graphic designers brought this to the table, it was like, wow! It looks as if they’re lit up on the nail. It’s just enough of a pop of color.”

4. I Woke Up Like This ($18): Perhaps the most winter appropriate of the whole collection, this plaid explosion is based off the prominent coordinating pattern that pops up throughout the “***Flawless” video.

What’s you’re favorite wrap from the collection? If you try a pair, snap a pic and tweet it to us!