Would You Buy This New Meat That Comes in a Bag? 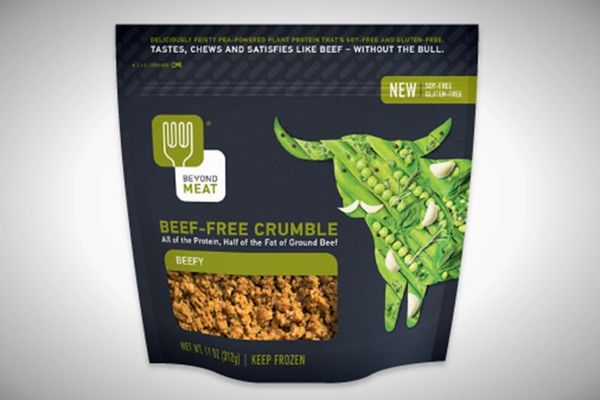 Beyond Meat is a new kind of meat made out of plants. It’s not fake meat or impostor meat like you’re used to seeing at the grocery store. It has all kinds of other supposed healthy qualities. Just ask Bill Gates. He and Twitter co-founder, Biz Stone, are investors in this new meaty startup.

Forget all those hang ups you have when it comes to vegan food. Yeah, your friend (psst, I’ve totally been that vegetarian friend) made you go with them to that vegan sandwich place and you didn’t LOVE it so now you think it’s gross or something. Well that sucks, but this is different. This is an option you might be into. Maybe more into than your veggie friend.

Sounds crazy, but as you may know, plant eaters are all different. Some are the Tofurkey Type, but some can’t stand the fake stuff. A lot of the “fake meat” out there is filled with other fake stuff that doesn’t always seem right for ingesting. Beyond Meat is different — it’s vegan, gluten-free, made with all non-GMO ingredients and every ingredient listed is one we’ve heard of before. Score! Those are all good things on our list of what to eat.

On the other hand, we’re so confused by how real the beef-free crumble and grilled chicken strips look in these pix. Does it creep you out or make you really hungry? We can’t decide, either.

But! For a full-time carnivore looking to amp up their omni-presence, replacing real meat with meat made from plants could be the way to go. You probably don’t need us to remind you, but switching a couple meaty meals a week with plant-based plates could help reduce greenhouse gas emissions and aid the environment in a very significant way. Don’t take our word for it, this is the UN talking.

No matter what your usual diet is, Beyond Meat wants to revolutionize the way we think about both meat and the stuff that looks like meat. Maybe next time you’re considering chicken options in the supermarket, it won’t just be about how expensive or organic your options are, but whether you want breast, thigh, or plant-based chicken. Beyond Meat is currently sold in supermarkets like Whole Foods, Publix and Sprouts, and is expanding to Safeway in May and Target in September. You can locate a store closest to you here or order on their official site.

What do you guys think — Beyond Meat recipe roundup?! Would you eat replicated meat?

Lisa Raphael
In her past professional lives, Lisa has served the masses as the Editorial Director at Brit + Co, Bieber Whisperer at J-14, Golden Girls Fan Club Prez at Lifetime and Talk Show Host Understudy to Katie Couric. Now, she's taking on the sports world at The Relish, teaching Hairography 101 in her spare time and will forever be trying to fill the hole Zayn Malik left in her heart.
Diet
Recipes
Diet Vegan Recipes Vegetarian Recipes
The Conversation