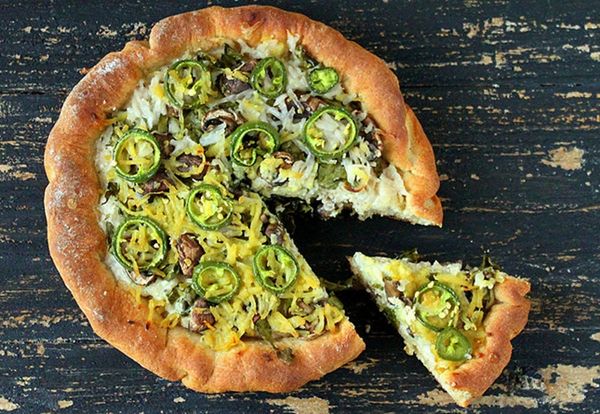 Sure we had our doubts when Beyoncé and Jay-Z announced that they were going vegan for 22 days at the end of 2013, but the proof is in the chia pudding: they did it and look DAMN GOOD. All of a sudden, our usual bacon-loving Twitter and Facebook feeds are filled with friends taking on the challenge in their own kitchens and we want to help. If you’re worried that meat is irreplaceable, we have 22 recipes that are going to put your doubts in a box to the left, to the left and make you say, “wow! I can’t believe it’s not, not-vegan!” Live-it, don’t diet with a different dish for each day of your 22 Day Vegan Challenge.

1. Vegan Egg McMuffin: Morning, sunshine! Get your McD’s fix on the Challenge without having to hitch a ride through the drive-thru. (via Vegangela)

2. Coconut, Almond + Quinoa Breakfast Cakes: Get your brunch on in a healthy, delicious fashion with these flapjacks. (via The First Mess)

3. Soy-Free Eggs Benedict: If you think every vegan dish has to have tofu in it, think again. These get the brunch treatment using chickpea patties in place of the egg, a cashew-based sauce for the hollandaise all atop (wait for it) shiitake bacon(!!). (via Keepin’ It Kind)

4. Vegan Cheese Plate: How many times have you moaned, “I could NEVER give up cheese!” as a reason for not being able to go vegan? Well, find a new excuse because we have a little secret for you: vegan cheese is actually pretty easy to make and crazy delicious to eat. (via The Clean Eating Machine)

5. Chipotle, Citrus Sweet Potato Soup: Spoiler alert, it’s easy to make many soups vegan by subbing in veggie stock and non-dairy milks. Plus, it’s a hearty, delicious dish that’s usually cheap, quick to make. Go ahead, treat yo’self to the Vitamix or NutriBullet of your dreams pre-Challenge. (via Lunchbox Bunch)

6. The Best Healthy Vegan Chili Cheese Fries: You heard us — HEALTHY CHILI CHEESE FRIES. You could even go nuts and use sweet potatos. We won’t stop you. (via Fo Reals Life)

7. Raw Vegan “Salmon” Nori Rolls: Another reason to invest in a good blender: you can mix up paté (this one’s made with carrots, walnuts, sunflower seeds, kelp and spices) used in a sushi roll here. (via Food and Yoga For Life)

8. Kale Ceasar Superfood Salad: Kale is the popular, iron-filled, cool kid right now on the green scene so you’ll get to know him well if you don’t already. Though you’ll probably hang out with him and quinoa A LOT in your 22 days, here’s a recipe if you’re missing your old, anchovy and iceberg lettuce-filled pal Ceasar. (via Eat Life Whole)

9. Baked Tofu and Vegetable Egg Rolls: Make a version of this takeout staple that’s baked-not-fried and meat-free. Whee! (via Food52)

10. Lentil Mushroom Burgers: We can’t promise these will taste the same as the grilled patties you’re used to, but they’ll scratch your burger itch with big flavor that’s still veg! (via Oh My Veggies)

12. Baked Mango Sriracha Cauliflower Wings: Don’t miss out on the tailgating with these sweet-n-spicy subs for buffalo wings. That will hereby be known as buf-faux-lo wings. (via Vegan Richa)

13. Pulled Pork Jackfruit Tacos: No, it’s not magic, it’s a recipe for turning a can of jackfruit (you’ll be able to pick that up at an Asian grocery store!) into pulled pork. (via A Vegan Obsession)

14. Cauliflower Mac & Cheese: Once you go cauliflower mac & cheese, you might never go back to that blue box ever again. (via Love & Lemons)

15. Vegan Lasagna: A delicious vegan lasagna just like grandma used to make. If grandma was well-versed in delicious Italian raw and gluten-free cooking. (via Brit + Co.)

16. Coconut Pot Pie: Coconut milk and spices give this the dreamy creaminess you’re used to in the chicken version and the cute sketches on this blog will assuage your fears about what your pantry needs to be stocked with in order to make it. (via The Vegan Stoner)

17. Crab Cakes: Hearts of palm are the secret ingredient to keep your seafood cravings at bay in this recipe. (via Olives for Dinner)

18. Deep Dish Jalapeno Popper Pizza: A dish that combines all of our favorite guilty pleasure appetizers into one mouth-watering dinner gives us the good kind of heartburn. (via Vegan Richa)

19. Spaghetti Squash Pad Thai: Spaghetti squash in this Paleo entree helps you make a mean, guilt-free Thai dish that you’re not going to find on Seamless. (via FitSugar)

20. Homemade Vegan Cronuts: There’s no shortage of delicious vegan desserts out there — if you don’t believe us, head to your nearest bakery or Pinterest board and get ready to salivate. This recipe proves you can still get your “Cupcake of the Moment” fix and eat it too during the Challenge. (via House Vegan)

21. Vegan Peanut Butter Pretzel Truffles: As long as you don’t have an allergy, peanut butter can be your best friend, New Temporary Vegan! In your oatmeal or on grainy toast in the AM, it’ll give you energy to kick off your day and in baking it will be a sub that won’t even make you miss the plain butter you’re leaving out. Plus, peanut butter pretzel anything sounds good to us… (via Minimalist Baker)

22. Momofuku Milk Bar’s Birthday Cake: A vegan version of one of the most decadent desserts from one of the most delicious (and deliciously naughty) sweet spots in the world proves once and for all, you, on your 22-day vegan challenge, can have your cake and eat it too. (via GF in the City)

Have you tried the 22-Day Vegan Challenge? Would any of these recipes give you the inspiration to do it?!

Lisa Raphael
In her past professional lives, Lisa has served the masses as the Editorial Director at Brit + Co, Bieber Whisperer at J-14, Golden Girls Fan Club Prez at Lifetime and Talk Show Host Understudy to Katie Couric. Now, she's taking on the sports world at The Relish, teaching Hairography 101 in her spare time and will forever be trying to fill the hole Zayn Malik left in her heart.
Beyonce
Health
Beyonce Food Recipes Roundups Vegan Recipes
More From Health