14 Trendy Places Where You Should Have Your Next Birthday Party, According to Celebs 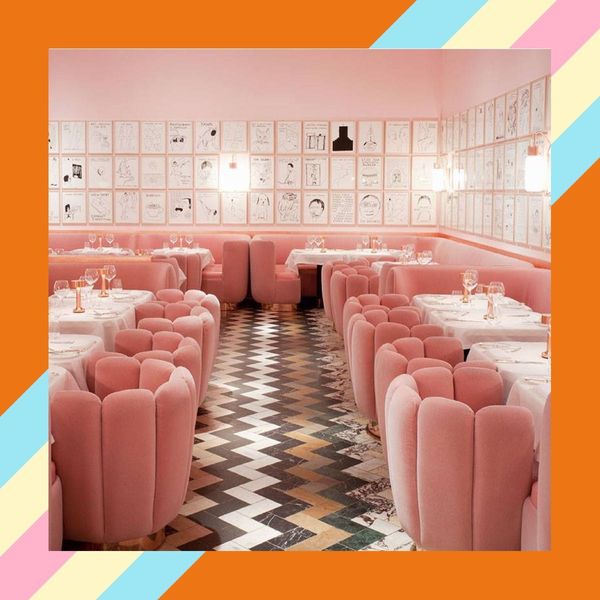 RELATED: Out of Office: What to Pack for a Trip to Tulum

A nursery can say a lot about a momma's style. It's where you can play around with childlike imagination, show off your design sensibilities, and put all your love, hopes, and dreams for baby on display. Plus, all your maternal energy has to go *somewhere* before baby arrives. To help you get things started, we've scrolled through the 'Gram to find the most inspiring baby's rooms— from whimsical and charming to modern and edgy—you're bound to go gaga for at least one. Find your favorite below, and get nesting!

EMMA HOPP PHOTOGRAPHY on Instagram: “I have had several requests to share our nursery, and it’s just about done! I’ve been nesting hard core and just have a bit more organizing…”

Balance an overall minimalist design aesthetic with a wallpaper that's eyecatching, not overwhelming.

Tiggy's Nursery & Home on Instagram: “🐘 S A F A R I T H E M E 🦓 Does your nursery have a theme? Add some color with our awesome selection of modern and colorful wall stickers!!…”

Maybe you can tell by the amount of in-belly somersaults that your little one is going to be adventurous? This mountain theme is perfect for a wild child.

Lookin' to raise a boho babe? Tassels, indigenous-inspired prints, and a nature mural are the ways to go.

Plum + Sparrow | Moses Baskets on Instagram: “Taking nursery style notes from @mrskmarino😍 The layered rugs and those sweet hanging plants behind the chair!! So perfect 🙌🏼⠀ ⠀ ⠀ ⠀ ⠀ .⠀…”

If you're going from plant mom to the real deal, consider creating a garden wall or keeping your fave potted greenery in the nursery.

N i c o l e on Instagram: “A black wall is bold but a black nursery wall was a design risk. One that gave me the confidence in my design choices that I may not have…”

Black paint might feel taboo for a baby's room, but when done right, it can seriously pay off as a cool design choice.

Let your fave characters serve as inspiration for the whole design (we spy a few familiar faces here).

We haven't seen any of the royal baby's nurseries, but we imagine it to be something like this. Create some custom drapery for a nursery fit for a princess.

Project Nursery on Instagram: “There's just something about a beautiful, classic nursery! We're here for the floral-meets-check design. 🙋‍♀️🙋‍♀️ Design:…”

Forgo trends, and go for a classic design with preppy patterns and lots of southern charm.

the brickies wife. on Instagram: “wolfes room is here // after 20months of life, he finally has a bedroom that isnt just a cot and rug 😅 and i am obsessed, his new…”

A baby with an edgy name deserves an equally edgy nursery...right Wolfe?

The Paper Party Company - Lisa on Instagram: “Thanks for all the love on my new logo yesterday, it really does mean the world 🖤 There’s still 20% off everything in my Etsy store with…”

Add magic to any nursery with starry embellishments and quirky accents.

Don't want to commit to an all-dark look? Paint on a scallop half-wall design, and accessorize the top half with plenty of personality.

Little Guy Comfort on Instagram: “🥰 A soothing place for the arrival of mommas baby girl!!! 👧🏼🤱🏼❤️ Thanks to momma @draytler for sharing this amazing picture! #SpotCrib”

Something tells us this shiplap nursery is Joanna Gaines-approved (and does it get any more design points than that?).

Why not let your crib sheets steal the show? Sidenote: We can't get enough of this eucalyptus mobile!

Lonny on Instagram: “Like a regular nursery but a little more @gucci. 👀💕🙌🏽 A perfectly plush retreat designed by @tamaramageldesign.”

You know you designed a cozy nursery when it becomes the pup's new napping spot.

Lana Dmitruks on Instagram: “Can you spot Caras little eye peaking through the crib. 😂😍 She finally had her first nap in the crib ..on her own like the big girl that…”

If Joshua Tree National Park were a nursery...why not take inspo from your favorite vacation spot?

Double a decorative shelf as storage space, and you've got a nursery as functional as it is cute.

Alexa, turn on nature sounds. It's the only thing this forest-inspired nursery is missing.

Proof that navy works for both girl and boy nurseries.

A table and chairs serve as a great place for tea parties, crafting, and sneaking in some work while the little one sleeps.

Jordyn Hadwin on Instagram: “Having a girl is SO fun!!! Found this amazing little ottoman on @offerup last week and I’m obsessed 🙌🏻 it matches perfectly with her…”

Our love for all things rattan is alive and well, and the best part? It goes with everything, so you really can't make a bad design move with it.