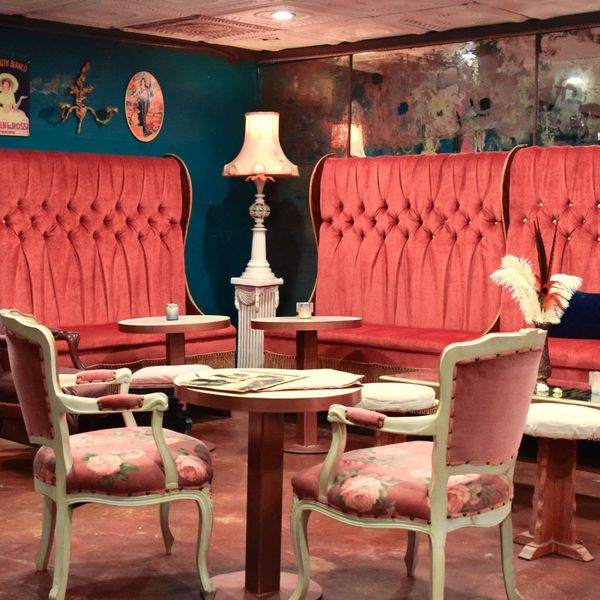 Date night is always more fun with the girls, so grab your besties and party in style on February 14th. We've rounded up a list of must-visit bars and restaurants around the world where the cocktails are major, the cuisine next-level, and the decor red to the max — because it is Valentine's Day after all.
Dirty French in New York City: For a quintessential NYC GNO, head to Dirty French in the ever-chic Ludlow Hotel. Their lively bar serves as V-Day headquarters for libations before moving over to your table, where you can chow down on French-Moroccan favorites (think lamb carpaccio with eggplant and sheep's yogurt, duck à l’orange with ras el hanout, and their signature "Indochine" chicken) in a New Orleans-inspired atmosphere. Did we mention Madonna, Gwyneth Paltrow, and Sara Sampaio have all been spotted here?
W Austin Secret Bar in Austin: There's something about Feb. 14th that calls for imbibing in secret, sexy lairs. Meet W Austin's underground gem that's always packed to the brim with the city's fashion set and will be happy to oblige for your champagne campaign agenda. The best part? You can select vinyls from the adjoining records room to play on the Secret Bar’s vintage sound system.
Los Fuegos in Miami: Faena Miami Beach is hands down the most luxurious hotel for celeb spotting and leisurely days sun bathing under their red-and-white-striped umbrellas. When you do decide to towel off and grab a bite, look no further than Francis Mallmann's Los Fuegos. Awash in shades of rouge (with leopard touches everywhere), the Argentine hot spot boosts a wine list just as epic as the wood-fired empanadas and Asado experience. And don't forget to snap group shots against the famed hallway murals on the way out.
The Cellar Bar at Ballyfin in Ballyfin, Ireland: This former regency mansion turned luxury country house estate oozes opulence, so if you're in the market for a seriously #YOLO Galentine's getaway, consider Ireland for the occasion. And the discreetly hidden downstairs cellar bar for a pint of Guinness and a spot of food (fish and chips or shepherd’s pie, natch).
Buttermilk & Bourbon in Boston: If you're spending the most romantic day of the year in Beantown with your girl gang, Buttermilk and Bourbon is the obvious answer to the where-to-go question. Because why deal with overcrowded Italian joints when you could be devouring warm honey biscuits, fried chicken, and French onion mac and cheese? Don't worry, there's a raw bar too.
The Ladies’ Room at Fat Rice in Chicago: This moody, red light district-reminiscent lounge is exactly where you want to bitch about exes and maybe even meet some new prospects — over pork and ginger dumplings.
Uchi in Austin: Craving sushi and sake on V-Day? Aren't we all. Make a large party res at "the little house" with the red wallpaper, Uchi, and thank us later. Chef Tyson Cole's unique take on omakase isn't the norm — thanks to the freshest fish flown in from Japan daily and his dexterous skills in the kitchen — and we like it like that.
The Bowery Lobby in New York City: Rumor has it Gigi and Zayn started their romance here and Chloe Sevigny, Emily Ratajkowski, Hailey Baldwin, and a bevy of Kardashian-Jenners have been known to visit, so if you want a trendy locale for adult beverages in New York City, the Bowery Hotel is it.
Red Bar in London, England: Plan on being in Londontown on V-Day? Bop around Mayfair for some of the best shopping in the city, then settle into this scarlet beauty for bespoke tipples and girl talk.
ACME Downstairs in New York City: ACME is always a smart stop for solid bistro fare in Manhattan’s Noho neighborhood, but below the restaurant there's a rock ‘n’ roll club that's been transformed into a seductive cocktail bar. Since you like rubbing elbows with socialites, fashion girls, and Insta influencers, you'll fit right in.
Bon Bon Bar in Göteborg, Sweden: Expect to see plenty of beautiful people at this Swedish cocktail bar, lounge, and social club that's considered to be one of the "world's most beautiful bars." And should you choose to dress thematically (in crimson of course), kudos to you.
The Lobster Club in New York City: This Japanese brasserie is the first restaurant to be designed by world-renowned architect Peter Marino (of Chanel, Louis Vuitton, Dior, and Bulgari flagship fame) and if it's good enough for Lauren Santo Domingo, Vanessa Traina, and Mary Kate and Ashley Olsen, it's good enough for us. PS — you'll be eating off original Picasso plates. #NBD
Milonga Room in Austin: Late-night martinis with your mains? A welcome tradition at this East 6th Street speakeasy inside the Buenos Aires Café. Definitely don't leave without sampling their "tragos" specialties either, comprised of bitters and Fernets.
(Re)Mix Club in Beijing, China: Mix Club may be the wildest scene in Beijing (complete with internationally known DJ talent), but if you and your squad are looking for the VIP treatment, venture beneath Mix Club to Remix. It's swanky, not as crowded, and definitely ideal for Galentine's Day behavior.
The Lambs Club in New York City: Not feeling too-tight bandage dresses at the club in the dead of winter? Same. Meet us at the other club — The Lambs Club — next to the fireplace. Indulging in martinis, Dover sole, and chocolate and pecan mousse with our soul sisters, before going home to bae (AKA sweats).

Where are you planning on spending Galentine’s Day? Tweet us at BritandCo!