12 Fashionable Hotels Bars Made for Girls’ Night Out 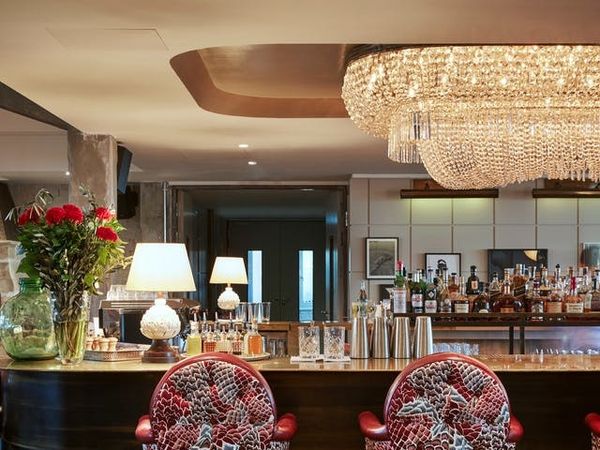 Drinking at posh hotel lounges is de rigeour for jet-setting style stars. And when it's blustery outside, the only logical thing to do is get toasted and toasty in the hippest of settings. Add in gourmet bar bites and mixologist masters to befriend and you've got yourself a killer girls' night out. Take not for your next travels with everything from a writer-fave enclave in Paris and a craft cocktail nook in Denver, to a designer refuge in the heart of Manhattan, here are 12 hotels worth checking into for the fashionable bar scene alone.
Rose Bar at Gramercy Park Hotel in New York City: Rose Bar is one of the hardest velvet ropes to gain entry past and for good reason: A-listers, designers, and society girls flock here for the atmospheric delights and iconic works of art from Warhol, Basquiat, and Hirst. During fashion week it's buzzing with invite-only after-parties and if you're lucky enough to score a covetable seat at the walnut lacquered bar, then you'll have prime real estate for spying NYC's glitterati as they saunter in.
The Fumoir at Claridge’s in London: Clad in ruby red tones with Lalique crystal panels at every turn, The Fumoir is inherently sexy. It's also the setting in which Claridge's artist-in-residence David Downton draws his well-appointed subjects at his favorite table. Diane Von Furstenberg, Christian Louboutin, Dita Von Teese, and Sarah Jessica Parker are just a few who have been sketched by the master.
Suite 6A at The Ramble Hotel in Denver: Many well-heeled visitors to The Ramble may get distracted by the impressive lobby bar, but venture downstairs to the dimly lit (and much more intimate) Suite 6A, where the real fun awaits. Spearheaded by the legendary Death & Co mixology team, this Denver outpost switches up its menu weekly and always lures an eclectic bunch of in-the-know patrons to its 20 seats.
Bar Hemingway at the Ritz Paris in Paris: Some would describe Bar Hemingway as pure magic, and they would be right. Rub elbows with fashion editrixes, writers, local patrons, and supermodels (Kate Moss is a fan), or simply marvel at bartender extraordinaire Colin Fields' creations — either way, you're in good company.
Hot Tin at The Pontchartrain in New Orleans: Life is good in The Big Easy, especially when you're dressed to the nines and living your best life on the top floor of this historic hotel. Whimsical AF, with a nostalgic nod to its former glory days, The Pontchartrain is a Garden District gem and Hot Tin its crown jewel.
Club Bar at Soho House in Berlin: There's a strict no photos policy at the fashionable Mitte landmark and that's because famous tastemakers are known to drop in for drinks on a whim. Comfy club chairs by the fire, vintage bar stools, and stiff concoctions with a side of glamour — what more could you want?
J-Bar at Hotel Jerome in Aspen: When in Aspen, cocktails at this Wild West watering hole in the swanky Hotel Jerome are a must. And whatever you do, wear your best après-ski chic attire for the occasion. Thanks to the high-low crowd, there's always an Alpine fashion show to witness after everyone descends the slopes.
Pulitzer's Bar at Hotel Pulitzer in Amsterdam: An old-school Art Deco haunt is a fashion lover's best friend when in Amsterdam and Pulitzer's is tops. Overlooking the canals, it's within walking distance of Dam Square and the quaint shops of Jordaan. It's also where influencers and front row regulars can be seen sipping nightcaps while chatting up the talent behind the bar.
Assembly Rooftop at The Logan in Philadelphia: Nine levels above The Logan's artfully designed rooms, you'll find the premiere vantage point of the Philly skyline — and the city's most stylish set working the room at Assembly. Lounge by the fire pit, cocktail in hand, before heading down to the much buzzed about Urban Farmer for a farm-to-table feast.
Nacarat Bar at Queen Elizabeth Hotel in Montreal: Between the storied tales of the Ziggy Stardust bygone era and the seriously quaffable libations, a night out at Nacarat Bar is one to remember. Spruced-up party goers gather for the international DJ sounds and stay for the acclaimed spirits at this sophisticated drinkery.
The Hawthorne at Hotel Commonwealth in Boston: When in Beantown pop into The Hawthorne, where Boston's elite go for adult bevs you can't find anywhere else. Not only are their digs cozy, their bar polished, and their multiple rooms ideal for a GNO, but they're located inside a stunning boutique hotel that's quality turf for all those instas.
Lobby Bar at Gstaad Palace in Gstaad: Grace Kelly, Brigitte Bardot, and Elizabeth Taylor have all holidayed here and if you happen to be taking a rendezvous in Switzerland this winter, you can add your own name to their illustrious guest list. Happy hour in the Lobby Bar is par for the course, where the main act is a parade of designer capes, caftans, and coats — and (ski) boots that were made for walking the Gstaad red carpet to your table.

Where do you go to drink when you dress up? Tweet us at BritandCo!