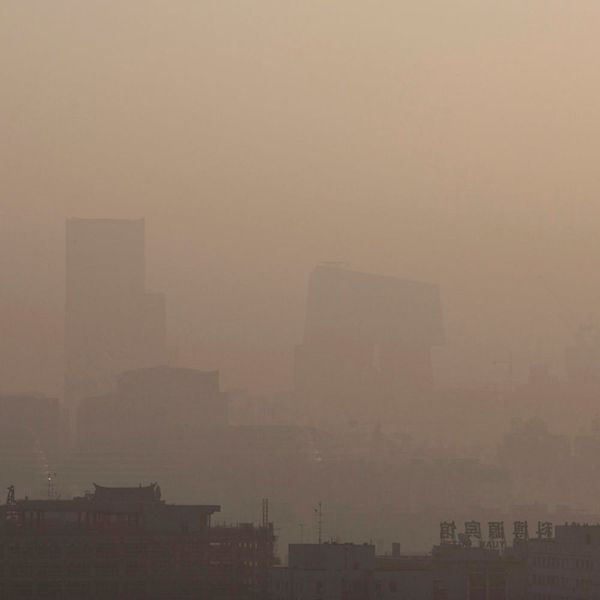 At this point in time, we all know that Mother Nature could use a giant helping of TLC to help curb nasty conditions like air pollution and climate change. But when it comes to feeling the day-to-day impact of human-made environmental degradation, some places on this earth are hurtin’ more than others. One of those places is China.

Earlier this month, Beijing released its first ever red alert over air quality, drastically restricting the driving and general house-leaving of its nearly 21 million residents. Smog is so thick in the cities of Beijing, Shanghai, Guangzhou and Xi’an that PM2.5 air pollution — that is, air particles with an aerodynamic diameter less than 2.5 μm, which translates to BAD BAD NOT GOOD AT ALL — exceed the World Health Organization guidelines for air quality.

In other words, just breathing the air in some major Chinese cities can raise a person’s likelihood of developing heart disease, strokes and certain cancers. Last year, The Guardianreported on how Beijing in particular is becoming so polluted that it’s reached a point of “airpocalypse,” where people are being forced to wear heavy-duty face masks outdoors, or build plastic bubbles around their kids’ playgrounds, to keep the toxic air at bay. It’ s super scary stuff. And one Canadian company saw an opportunity in the environmental mayhem.

Vitality Air is selling artisanal air to China. You read that right: The Alberta, Canada company is selling aluminum cans of compressed Rocky Mountains air to Chinese consumers who are looking for a LITERAL breath of fresh air. Shoppers can even choose whether they want air that was bottled in Banff or Lake Louise, two popular tourist destinations. At around $14, a three-liter can is supposed to last around 80 breaths. It’s not a lot, given that the average adult takes between 12 and 20 breaths every minute while resting. But, wouldn’t you know, wealthy Chinese buyers are eating (err, inhaling) it up. It turns out that people really want to breathe air that isn’t poisonous.

Vitality Air’s next China-bound shipment is expected to be around 4,000 bottles, according to Geek.com. And, sadly, that estimate isn’t just a bunch of hot air.

Do you think bottled air is genius or kinda the worst? Tweet us your hot take @britandco.

Kelli Korducki
Kelli is Brit + Co's Senior News Editor. Her interests include sensible footwear and glasses that take up 25 percent of her face.
Entertainment
More From Entertainment