Want to Brew Your Own Beer? There’s an App for That! 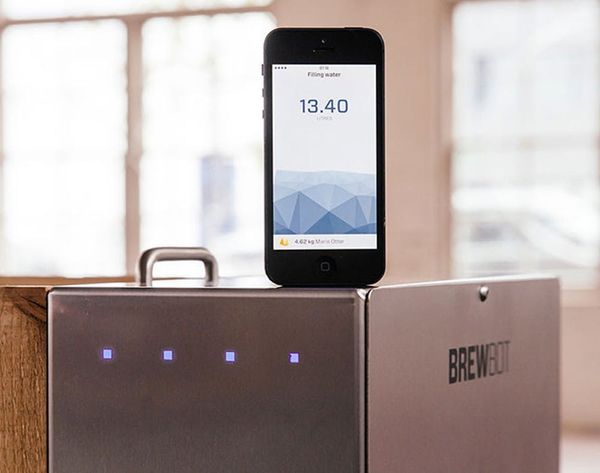 Okay, it’s technically more than just an app, it’s a brewing system that connects with your smartphone, and it’s about to make brewing your own craft beers virtually foolproof. Thanks to Brewbot, a new Kickstarter project from the U.K., you’ll soon be able to ditch the thermometers and rely on an app instead. No more ruining a batch because you missed the window for adding the next ingredient.

Brewbot is a two-part system, the first is the actual brewer, which is quite an investment of both space and money, but it’s a perfect setup for the serious home brewer or even a small restaurant wanting to start their own line of house brews. The second component is the app, which automates the actual brewing process. To start out, upload your recipe into the app, or use one of the ones that comes preloaded. When you’re ready to start the batch, tap “Start Brew” in the app, and the Brewbot will heat the exact amount of water that your recipe requires. After that, the app will prompt you to add all the ingredients at just the right time. It’s as simple as that! It also helps you manage the fermentation process, which can be tricky.

But what we really love about Brewbot isn’t the fact that it makes the process virtually foolproof, but that it enables you to really focus on creating a new recipe. When you remove the worry about getting all the steps right, you can focus on making tiny tweaks to your recipe and taste-testing the results to make your house IPA or porter something incredibly unique. The app gives you license to get creative with your ingredients, and focus on coming up with new and interesting flavors. We love anything that gets that creativity brewing. Maybe it’s time to make a homemade pumpkin beer for our Pumpkin Cider Beertail!

Finally, the design of the Brewbot is awesome. Yes, we’re sure it adds to the cost (and it is an investment!), but if you’re going to take up space in your home, you might as well have a beautiful appliance, right? We’ll be excited to check one out in person. If you’re ready to get serious about making beer, this is the way to go. Take a look at the video for a complete picture of the Brewbot:

Have you ever tried making your own beer? Tell us what flavor you made and how it went in the comments!

Kristin Appenbrink
Kristin combines her love of words, a passion for creating, and a drive to learn new skills. Plus, as an obsessive ice cream maker and storyteller she always has a scoop to share.
Apps
Tech
Apps iPhone Kickstarter