The Hottest Looks + the Most WTF Fashion From Cannes 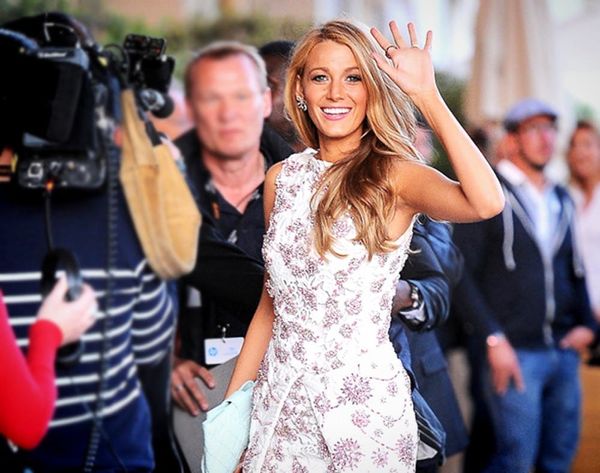 If we weren’t a wee bit jealous of stars and their fab lives already we are glowing green with envy after seeing their jets set down in Cannes over the last week. We rounded up some of our favorite looks from the red carpet, the premieres and the equally fabulous parties. Get ready to be floored by gowns that sparkled, bedazzled and brightened up the film fest-turned-catwalk. There might even be some bonus guy style in there… and of course the best of the worst looks! Spoiler alert: Blake Lively won the Most Enviable Accessory of the whole shebang with some arm candy we’d give an arm + a leg for…

If bombshells can look demure, Rosie Huntington-Whiteley and Cara Delevingne looked like demure bombshells in bedazzled metallic dresses at The Search premiere.

Our favorite red carpet rocker Lupita Nyong’o in Calvin Klein and Amber Heard in Vionnet both went for glittering gowns that we would wear today and also to our junior high dance. (This is a serious stamp of approval, trust.)

Adele Exarchopoulos, (who, btw you’ll probably be seeing a lot more of soon — she just became the youngest artist ever to be awarded the Palme d’Or at Cannes!) wore a Louis Vuitton gown with a shimmering black bustier and up-and-coming model Chanel Iman brought it like a Bond girl in gold lamé.

Liya Kebede was a total stunner in Roberto Cavalli. And, yup, we get it Blake Lively, a happy marriage makes one glow. Gossip Girl would approve of S in Giambattista Valli Couture, wethinks.

Cara Delevingne rocked a beaded Roberto Cavalli and Christina Hendricks bedazzled in all the right places.

Marion Cotillard‘s beaded creation by Maison Martin Margiela might be our favorite dress ever in the world — but we wouldn’t turn Kylie Minogue down if she lent us her metallic mini for a night. Especially if that night involved going to our ex’s wedding or something.

Is it weird that we would wear either of these dresses… any day of the week? Probably a little, but Lara Stone (in hot fuchsia Calvin Klein) and Jessica Chastain (in dreamy, drapey Elie Saab Couture) make them look so damn good!

America Ferrera played it casual, cool and still super sexy in a yellow Louis Vuitton top with a coral Missoni skirt. Rosario Dawson rocked a little peplum in her steplum in a paint-splattered print paired with racing flag checkered heels.

Technically these looks are darker than they are colorful, but we love the bright POCs on both Jennifer Lawrence (the blue on the dress and the green earrings) and Cate Blanchett’s gorgeous Givenchy beaded bodice.

Black + White + Gorg All Over

We told you Blake Lively had the best accessory of the festival. The dress is great and all, but, like, that Ryan Reynolds is smoldering… Zoe Saldana too looked smashing in Victoria Beckham and a chain belt we just might have to hack at home.

America Ferrera was way on in off-white in George Hobeika Couture, and Zhang Ziyi rocked a black and white Stephane Rolland that brought a little body armor realness to the carpet.

Think the black and white trend was only reserved for dresses? Think again, or better yet, watch Dita Von Teese and the rest of these ladies prove it. Dita brought class to the carpet in this number, while supermodel Coco Rocha won us over (eventually, it took us 60 seconds of head scratching) with this embroidered white suit.

Jennifer Lawrence’s wardrobe change for the Vanity Fair and Armani Party was one of our favorite looks of the week. Where can we get that belt, girl? The Search star Berenice Bejo looked ready for a dressy brunch that we would also like to attend with a romper and gorg red-orange heels.

Lindsay Lohan, Paris Hilton and (we’re sad to say) Karlie Kloss make up one very interesting bad girl’s club in this trio of unfortunate least faves. Oh, LiLo, at least the other two got red to walk on. Karlie, we’re telling Taylor…

We know it’s probably illegal in some states to say that Salma Hayek and Alessandra Ambrosio don’t look drop dead va va voom, but their Cannes picks came off more “high school prom” than “high end red carpet.” And Russian TV star Elena Lenina (middle) was too ridiculously awesome for us to leave off this list entirely. Hope she DIYed that necklace at least!

Of course, the fellas brought it to the fest as well. Liam Hemsworth, Robert Pattinson, Ryan Gosling, be ours?

What looks were your favorite and least favorite from Cannes? Will you use any of them for inspo for your own next fancy pants event? Share below!

Lisa Raphael
In her past professional lives, Lisa has served the masses as the Editorial Director at Brit + Co, Bieber Whisperer at J-14, Golden Girls Fan Club Prez at Lifetime and Talk Show Host Understudy to Katie Couric. Now, she's taking on the sports world at The Relish, teaching Hairography 101 in her spare time and will forever be trying to fill the hole Zayn Malik left in her heart.
Blake Lively
Trends and Inspo
Blake Lively Red Carpet