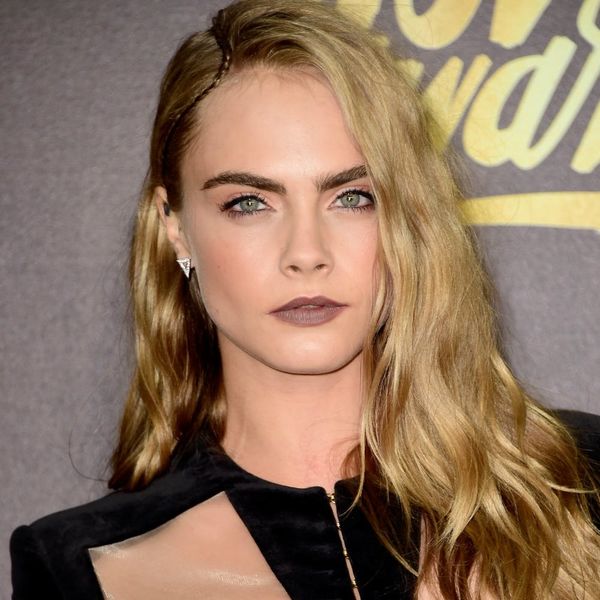 Kim K.’s not the only one setting out to break the Internet with nudes: Model and female cancer advocate Cara Delevingne just stripped down to her birthday suit too (as should you, according to science), and the reason behind it is truly admirable.

Posing in nothing but the animal artwork painted onto her skin by artist and I’m Not a Trophy founder Arno Elais, Cara has signed on as the first spokeswoman for the organization, which hopes to use its art campaigns to “create greater awareness for the rapid extinction of endangered species.”

“I am so proud to be an ambassador of @iamnotatrophy organization to create greater awareness in the malicious acts of trophy hunting and poaching of endangered species!” she captioned the gorgeous shots posted to her Instagram page.

I am so proud to be the an ambassador of @imnotatrophy organization to create greater awareness in the malicious acts of trophy hunting and poaching of endangered species! imnotatrophy.org

Whoa. That’s some seriously cool artwork. The message behind it, of course, is what’s truly important, though: Faced by threats such as trophy hunting and poaching, the site says that Earth has lost half of its wildlife population (including lions, rhinos, elephants, cheetahs, zebras, giraffes, gorillas and leopards) in the last 40 years alone — the lion, for example, has gone from a population of 450,000 in the 1940’s to just 20,000 today. Yikes. If that’s not a sobering factoid, we don’t know what is.

Fans can support the organization by purchasing one of Cara’s posters ($50), for which proceeds will go toward endangerment awareness — the group believes that it’s through visually stimulating campaigns and buzz that the younger generations will be spurred to care — and act.

In the meantime, let us all take just a minute to bow down to the compassionate and talented soul (“truly a woman who plays by her own rules,” says Elais) that is Cara Delevingne: Girl looks STUNNING.

Would you bare it all for a cause you were truly passionate about? Tell us over @BritandCo!

Nicole Briese
Nicole is the weekend editor for Brit + Co who loves bringing you all the latest buzz. When she's not busy typing away into the wee hours, you can usually find her canoodling with her fur babies, rooting around in a bookstore, or rocking out at a concert of some sort (Guns N' Roses forever!). Check out all her latest musings and past work at nicolebjean.com.
Art
Celebrity News
Art