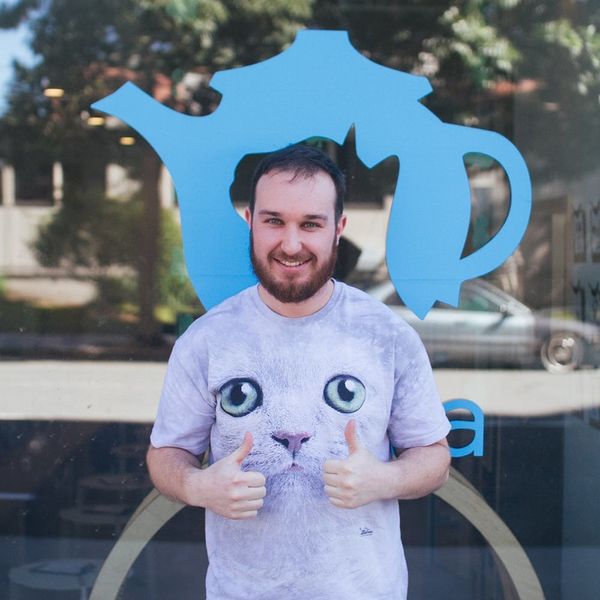 Meet Jeff. Jeff is our in-house data guy at Pet + Co. If you’re one of Jeff’s closest coworker friends, he will send you puppy GIFs throughout the day. It’s the best! What’s strange though, is that Jeff’s nickname from his days at Bleacher Report was “Big Cat.” Is Jeff a closet cat lover? He denies it, but admits an affinity for cat shirts. Collection count: “10 or so. Is that weird?” Um…

Despite Jeff being a “dog person,” when the team learned of a cat cafe opening up in San Francisco, we unanimously decided to send him. Jeff’s mission: Pick up a woman at a cat cafe.

I went with Jeff as his photographer and source of moral support. On the ride over, we brainstormed pick-up lines for Jeff to use. You’re a fine feline lover or You’re purrrfect or Some days I feel like a cat, do you? If all fails, I told Jeff to simply go up to a girl and then purr. That’s a guaranteed way to get digits.

Jeff wore his best cat shirt for this special day! He even got a haircut a week before in order to be ready for all the fine cat ladies of San Francisco! Let’s see how it went…

When we arrived at KitTea, the first step was familiarization with the place. Know the space, meet the cats and use all of this to your advantage when talking to the fellow cat cafe visitors.

With some solid cat play moves in his repertoire, Jeff began to show off for the ladies. The cats like Jeff, therefore so should you!

“I think the cats respect me. They recognize me as one of their own.” – Jeff

Despite the pick-up lines and the close spiritual connection with the cats, Jeff had a hard time picking up any women at the cat cafe. There were two prospects, but ultimately the sparks weren’t flying. What’s up with that? We asked KitTea cat wrangler Maggie McKay, working here since June, about love in the cat cafe, and here’s what she had to say:

B+C: How often do people come on dates to the cat cafe? Do you ever see first dates?

MM: Yeah, all the time. Sometimes it’s great. I guess it’s like a first date anywhere. You see between some people, it’s magic and it’s amazing. And every now and then you see a couple that’s super quiet and super awkward, and you’re like… Well, you guys are having a really cute time individually, but don’t know if you’re a match.

B+C: Can the cats be blamed for a missed connection at the cat cafe?

MM: No, no I wouldn’t blame the cats. If anything, the cats are like a litmus test. Cause I would say if I went on a date and there were cats involved and this guy couldn’t hold his own, I would be like huh… bad with pussy. Good to know.

B+C: Have you ever seen anyone pick up someone at the cat cafe?

So why no love, Jeff?

“I got a little bit of a weird vibe from one of them. I think her quote was, ‘I’m actually a cat‘ which is a little strange…” Fair enough, Jeff.

So while the mission was not a success in terms of meeting a fellow cat lover, there was an abundance of general cat love! And hey, who’s to stay that KitTea SF might not work out as the best place for singles to mingle in the near future.

Would you go on a first date at a cat cafe? Hit us up @BritandCo with the hashtag #petandco!

Victoria Haas
Victoria Haas is a photographer, native Texan, and one half of the food blog, Being Fed. She enjoys telling stories, celebrating Shark Week, and searching for the the perfect breakfast tacos.
Entertainment
More From Entertainment