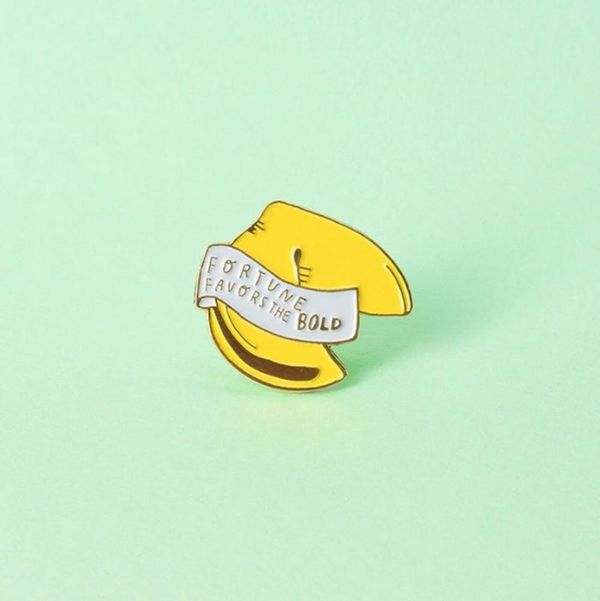 Last week, we were totally inspired by a photobook project that had 100 women stripping down to their skivvies to promote body positivity. Now, a few of our fave celebs have introduced us to another seriously awesome campaign that has us feeling all kinds of good about ourselves: I Am That Girl’s “You Got This” movement.

The community, which supports all things girl, has teamed up with Wildfang and 17 famous faces including actresses, Olympic athletes and top musicians to create a line of inspirational pins that will give you a boost of self-confidence and keep you extra-stylish. Pair them with some DIY patches on a favorite bag or jacket to really up the fashion ante on the days you’re feeling less than worthy.

Each one is designed with a special message from the awesome chick that helped design it, making it even cooler: Ladies like OITNB’s lead actress Taylor Schilling, or Mean Girls’ Amanda Seyfried, for instance, who both took to Instagram to show off their new wares.

“It takes a real tough cookie to know that sometimes you have to risk big to win big,” Taylor writes of her “Fortune favors the bold” fortune cookie pin. We’re gonna go ahead and say that Pipes would totally concur.

I'm so excited share this pin I designed with @wearewildfang and @iamthatgirl. Sometimes you have to turn up the volume to drown out the noises around you, listen to yourself, and learn to shine your own way. Get your pin at wildfang.com - 100% profits go to @iamthatgirl. #YOUGOTTHIS

Amanda takes a cue from her Mean Girls character Karen with her design, reminding us all to listen to that little voice within (though we’re guessing she means for far more than predicting the weather). “Sometimes you have to turn up the volume to drown out the noises around you, listen to yourself and learn to shine in your own way,” she says, borrowing a quote from En Vogue which reads, “Free your mind and the rest will follow.”

Also on board with the project? Actress Evan Rachel Wood, who designed a cute-as-can-be donut pin that has a powerful message behind it. “There is always more than meets the eye — even the sweetest things can pack a big punch,” Evan’s quote reads. “Donut underestimate me.”

At $10 a pop, you can total collect all 17, (like Sophia Bush, who is now rocking the above jacket) and feel great about doing it: 100 percent of profits go to support the organization.

Which pin are you most inspired by? Share with us over @BritandCo!

Nicole Briese
Nicole is the weekend editor for Brit + Co who loves bringing you all the latest buzz. When she's not busy typing away into the wee hours, you can usually find her canoodling with her fur babies, rooting around in a bookstore, or rocking out at a concert of some sort (Guns N' Roses forever!). Check out all her latest musings and past work at nicolebjean.com.
Designer
Style News
Designer