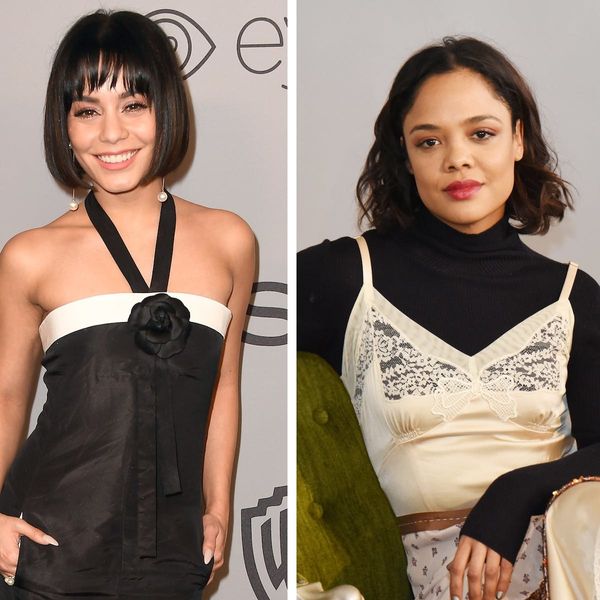 Pretty much all of 2013 to 2017 has been about the lob, but that haircut's reign might finally be coming to a close. If Hollywood trends are any indication, 2018 is going to be all about the BOB, whether it be straight, layered, wavy, or textured. You'd be surprised at just how versatile the look can get! Here are 10 stars who are sporting this hairstyle in 2018.
Olivia Wilde: The Vinyl actress surprised the world when she showed up at a Grammy viewing party last month in Los Angeles with possibly the shortest haircut we've seen on her yet! (Photo via JB Lacroix/Getty)
Whitney Port: The new mom showed off her new chop on December 27 of last year on Instagram in a video captioned, "It had to go." (Photo via @whitneyeveport)
Lauren Conrad: Whitney Port's former co-star from The Hills, who is also a newly minted mama, went under her friend and stylist Kristen Ess' scissors. Conrad cut her hair not once, but twice before she settled on this short blunt bob. (Photo via @laurenconrad)
Tessa Thompson: The Westworld star showed off her gorgeous, wavy locks at the 2018 Sundance Film Festival in Park City, Utah. (Photo via Lily Lawrence/Getty)
Vanessa Hudgens: A bona fide fashion icon, Hudgens is always experimenting with her style. Her latest look, which she wore to the Golden Globes afterparty, is a classic bob that would make any flapper proud. (Photo via Frazer Harrison/Getty)
Greta Gerwig: The Lady Bird director attended the 2018 Producers Guild Awards and proved just how versatile short hair can be with this side-parted, textured look. (Photo via Jon Kopaloff/FilmMagic)
Lucy Hale: The Pretty Little Liars star has been sporting a bob for quite some time now, and it doesn't look like she's planning on stopping in 2018. Here she is showing of her sweet style at the Disney X Coach Collection luncheon last month. (Photo via Stefanie Keenan/Getty)
Zooey Deschanel: The quirky New Girl actress pulled off one of the biggest hair transformations we've seen this year (sure, it's only February — but still!) when she chopped off her long brown hair. Don't worry, her signature bangs were left intact! (Photo via @zooeydeschanel)
Cate Blanchett: The ethereal Blanchett wore her bob in elegant waves at a gala in Geneva, Switzerland this January. (Photo via Chris Jackson/Getty)
Nina Dobrev: The Vampire Diaries alum has been taking her classic brunette locks shorter and shorter, and it's currently a chin-grazing length. (Photo via Frazer Harrison/Getty)

Would you try a bob? Let us know @BritandCo!

Would you try a bob? Let us know @BritandCo!

Kimberly Wang
Kimberly Wang writes about all things pop culture, tech, style, and beauty. She's a Bay Area transplant and has an MFA in Creative Writing from Columbia University. On a sunny New York day, you can find her hanging out with her mini schnauzer Isabelle Jellybean on a blanket in Central Park.
Celebrity Hair
Hair
Celebrity Hair Haircuts Short Hair
More From Hair