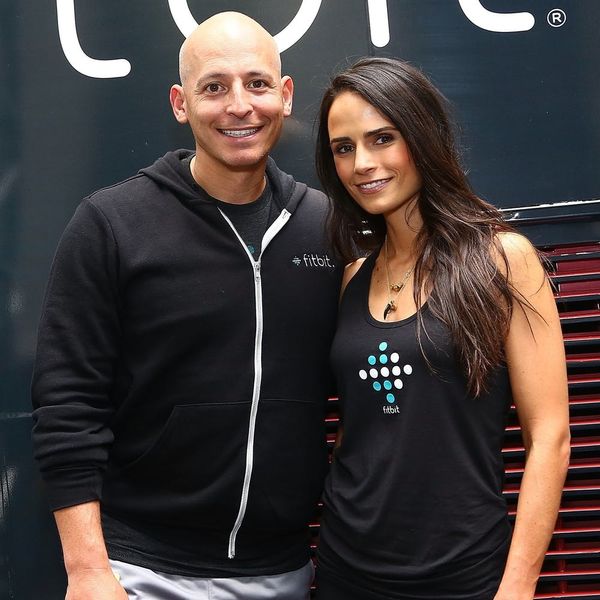 Celebrity trainer Harley Pasternak has worked with some of the fittest bodies in the business — Kim Kardashian West, Adam Levine (Pasternak calls him “a beast”), Ariana Grande (“never misses her step goals”), Jordana Brewster (“works so hard in the gym”), to name a few — but his health advice is surprisingly simple. The former Canadian hockey player, who ran a superhuman lab before starting a personal training business, says the five most important daily habits for a healthy life are: Get 10,000 steps a day, get seven hours of sleep, eat five meals with protein and fiber, do five minutes of resistance exercise, and unplug for an hour.

As a Fitbit ambassador, Pasternak is a big proponent of moving more. After studying the 10 healthiest countries in the world, he found the thing they all had in common was that people, on average, walked over 10,000 steps a day (vs. Americans, who average around 4,000/day). He also says the wearable device has revolutionalized the way they work with clients because they can now keep track of what people did outside the gym to give them credit in addition to what they did in it. He even gave his client and former Fitbit ambassador Julianne Hough her first Fitbit (“she owes me $149,” he quips). We chatted with Pasternak about staying healthy, mistakes to avoid, and the weirdest body part he’s had to train.

Brit + Co: What are some simple things you can do to stay healthy during the holidays?

Harley Pasternak: The same things you do to stay healthy all year. Move when you can, don’t move when you shouldn’t, and make smart eating decisions. The idea that we hibernate this time of year and we tend to move less and we tend to stay inside more… I think it’s really important that we move more. You burn more calories and more fat in a cold environment than a warm one. So this is a great time of year to get outside and go for a great walk because you’ll be doing even more for your metabolism and your physique than if you were doing it in a hot, sweaty, environment. And that’s something to embrace. There’s a difference between a blizzard and just a cold night or a brisk day, and I think you should go outside and definitely walk more.

I think there are a lot of parties happening this time of year, and even when you’re not partying, there’s a lot of temptation. There are holiday baked goods, there are companies that make celebratory chocolates for this time of year — so for me, I like to tack on an extra 1,000 steps a day basically over December and just be a human. If you want to take a bite of that gingerbread cookie, do it. You should know what it tastes like. Don’t have the whole thing, but definitely do it. Someone made it, it’s probably delicious, you can only get it this time of year, you’re good.

I think sleep is really important. There are a lot of celebratory events this time of year… [make] sure that you don’t have to be the last one to leave the party. You don’t have to drink yourself silly and eat yourself silly. Pick one, and don’t do it more than twice a week. Make sure you pick your party or your event or your celebration and don’t make it a month long thing.

B+C: You’ve talked about the importance of walking in losing weight — is it really that easy?

HP: I think walking is the most important thing you can actively do to transform your body and your health. I think that it doesn’t require any equipment, it doesn’t require a special machine or building, you don’t have to carve time out of your day to do it. It’s a game changer. We have a lot of clients who’ve done pretty radical extreme intense things over the last several years to get ready for film roles, and I myself was the one telling them to do them often. And now [it’s] how do you do things smart rather than just hard. Like getting people to stay at a hotel a mile and half from my office, walk to my office, roll calls along the way, get some fresh air, come to me for 25 minutes, and then turn around and walk back. As opposed to taking a car service over, being there an hour before, strapping themselves to an elliptical, and sweating their butt off in a hot building. It’s really about living life and moving in a natural way, and walking is the ultimate of that.

B+C: What’s the biggest mistake people make when trying to get healthy/get fit?

HP: I think they do too much too quickly too hard. They depart from their normal lifestyle. If you decide one day, I’m going to get into shape, I’m going to be a raw vegan and run a marathon and do CrossFit, you’re doomed to fail. If you say, you know what I’m going to do, I’m going to walk around the block that I live on once before I go to work each day. And then next week when I come home from work, I’m going to walk around the block one more time. You slowly change certain aspects of your life and as a result, these are sustainable things. So if you used to do 6,000 steps a day, you may go to 8,000 and slowly get that up to 9,000 and 10,000 and beyond. That’s a better way to go than just one day going from being sedentary your whole life to saying I want to do 14,000 steps a day. Also using your Fitbit as not just a motivator but really as a way to keep checks and balances so you don’t go overboard.

B+C: What’s the weirdest request you’ve gotten from a client?

HP: We were doing a film called Highwaymen with Jim Caviezel. A lot of it is him driving a car, and it’s these close-ups. They wanted us to make his forearms and his hands way more muscular because the camera was always on the steering wheel. And I just nodded, I’m like, 100 percent, we got a forearms/hands program we’re going. There’s no such thing. That might have been the strangest.

B+C: How do you make sure each client is getting the workout that’s best for them?

HP: About 90 percent of a program applies to most people, but we have individual differences from injury history to fitness status, which would dictate personalization. I have the ability to communicate directly with clients or my staff talks to the clients, so it’s easy for me. The data I get from my clients is really helpful. So every morning I wake up I know exactly how many steps every one of my clients in the world did the day before, how many calories they burned, how intense those were, how they slept, what time they went to bed, what they ate. I have amazing data where I’m able to manipulate their program accordingly.

B+C: What is your favorite workout/exercise?

HP: I walk — literally, for me, it’s meditation; it’s not even exercise. It’s how I think, it’s how I communicate, it’s how I listen to music, it’s how I catch up with my friends and my family. It’s my time. And no one can find me. I actually will walk to things in lieu of driving whenever I possibly can. And if it’s a very far thing and I just get tired, I’ll stop and call an Uber. I just walk as much as I possibly can.

What are your best healthy habits? Share them with us @BritandCo.