15 Photos of Our Favorite Celebs Chowing Down on Fast Food 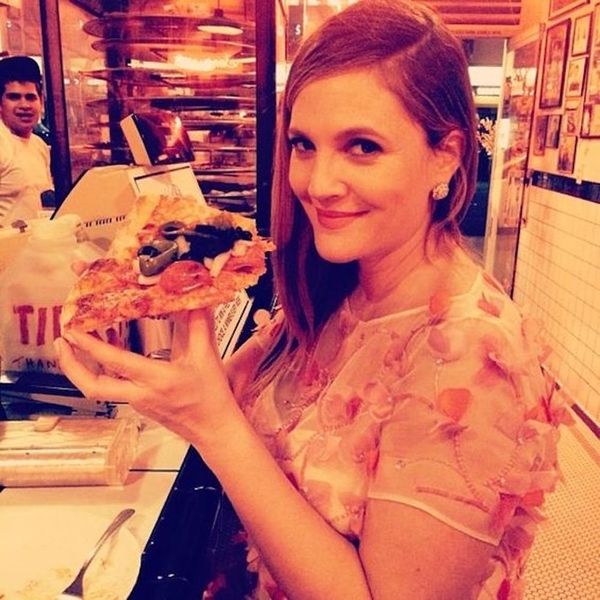 Even the most health-minded people get cravings for naughty food every once in a while, and there’s absolutely no shame in indulging. Sure, sometimes homemade fast-food copycats can be satisfying, but everyone has moments where they simply MUST have a Big Mac. Turns out, celebs are no different! These 15 photos show our favorite celebs enjoying the greasy deliciousness of fast food. And we’re not talking hip food trucks. We’re talking McDonalds, In-N-Out, Taco Bell… you get the picture.

1. Selena Gomez: Selena Gomez chowed down on Mickey D’s backstage before a CBS program. From the looks of it, she (like us) can’t get enough McDonald’s French fries.

2. Drew Barrymore: A radiant Drew stopped to pick up some ‘za after the Golden Globes two years ago. You can’t see it, but she was preggo in this pic! She’s absolutely *glowing* — we can’t tell if it’s from the pregnancy or the pizza.

3. Hillary Duff: Speaking of celebs who love pizza, Hillary Duff is notoriously a fan. Here she is chowing down while on the road, undoubtedly heading to do something fabulous yet completely down-to-earth, as our girl is wont to do.

4. Victoria Beckham: Nothing says “I love you” on Valentine’s Day quite like heart-shaped donuts. Posh Spice was feelin’ the love for New York when she stopped in to pick up these delicious Dunkin’ Donut holiday creations.

5. Kylie Jenner: Ahhh, who doesn’t wear stilettos and board a private jet while noming on Popeye’s Chicken? Kylie Jenner shows us how to rock our fast food favorites proudly and glamorously.

6. Justin Timberlake: When he’s not doing cute things with wifey Jessica Biel, JT likes to hit up Taco Bell. In fact, he did just that right after winning THREE People’s Choice Awards. We wish we could’ve been the servers in this joint.

7. Kaley Cuoco: Kaley has been outspoken about her healthy diet, but a girl’s gotta indulge every once in a while! Here she is proudly enjoying a McDonald’s hamburger with a side of fries. Rock on, Kaley.

8. Lena Dunham: She calls herself the voice of her generation, and if her affinity for Shake Shack is any indication, Lena Dunham may be right. The NY-based fast food joint is super popular with Millennials, and Dunham hasn’t been shy about her love for their burger-hot dog combo.

Snack before the globes

9. Emma Roberts: What Shake Shack is for New Yorkers, In-N-Out Burger is for Angelenos. Here’s Emma Roberts showing her affection for the beloved West Coast chain.

10. Beyonce: You know who else loves In-N-Out? Queen Bey. But Beyonce doesn’t just grab a burger and a Coke when she visits the chain. No, no, no — she brings CHAMPAGNE.

Reunited and it feels so good. @innout

11. Padma Lakshmi: Foodie Padma Lakshmi loves ALL food… even the fast kind! Here she is enjoying In-N-Out herself, captioning the photo “Reunited and it feels so good.” We feel you, girl.

lunch on me. LITERALLY AAHAAHAHAHHAAHAHHHAHAHA I'LL BE HERE ALL NIGHT KIDS @tacobell @fablifeshow

13. Chrissy Teigen: Chrissy Teigen is hands down one of our favorite celebs. When she’s not tweeting super-relatable thoughts or being completely adorbs with John Legend, she’s apparently eating Doritos Locos Tacos from Taco Bell. She really is #goals.

14. Miley Cyrus: Okay, so she’s technically not EATING fast food here (and she probably doesn’t munch on burgers, as she’s an outspoken vegan), but Miley is showing the love for the chain with this cute In-N-Out hat.

15. Kim Kardashian: Celebs love their In-N-Outs, apparently, and Kim K is no exception. She shared this photo of her first pregnancy craving (burgers and cheesy fries) when she was pregnant with little North back in the day.

Maggie McCracken
Maggie McCracken is a freelance writer, blogger and aspiring digital nomad. She writes primarily about food, travel, yoga and healthy living, and she has a background in health and science journalism. You can read more of her work on her lifestyle and travel blog, The Olive Branch.
Fast Food
Recipes
Fast Food Food Trends Instagram Roundup
The Conversation
Reviews:
More From Recipes