See How All Your Favorite Celebs Rang in the New Year 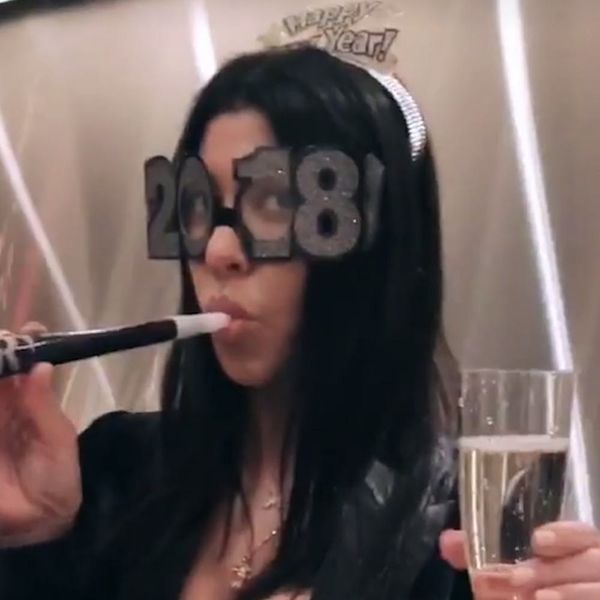 It’s finally here! After a long year full of politics, activism, scandal, heartbreak, and courage, 2018 has at last arrived, and our hopes for the new year are high (particularly after that standout NYE performance from one Miss Mariah Carey)! Celebrities were right there with us last night, celebrating the close of one chapter and the beginning of another as we said goodbye to 2017 forever. Scroll through to see how your favorite stars rang in 2018.
Paris Hilton: Hilton cozied up to her gal pals, including Rita Ora and Sofia Richie (who's on vacay with Scott Disick), in wintery Aspen. (Photo via @parishilton)
Sarah Michelle Gellar: SMG looked extra pleased to be receiving a sweet kiss from her husband of 15 years, Freddie Prinze Jr. (Photo via @sarahmgellar)
Christina Milian: The musician and her NFL player boyfriend, Matt Pokora, watched a spectacular fireworks show from the beaches of Dubai. (Photo via @christinamilian)
David Beckham: The Beckham men appeared to be having a blast together, posing for a series of silly selfies to welcome 2018 with open arms. (Photo via @davidbeckham)
Lucy Hale: Hale got all glammed up to introduce Imagine Dragons on Dick Clark's New Year's Rockin' Eve in a black sequined Haney minidress with an asymmetrical neckline, thigh-high Casadei boots, and Messika earrings. (Photo via @lucyhale)
Demi Lovato: Lovato performed at a poolside party in Miami while rocking a gorgeous purple sequined jumpsuit with a deep V and plenty of voluminous locks. (Photo via @ddlovato)
Cara Delevingne: The supermodel had a slumber party with all her favorite ladies, including sister Poppy Delevingne. "I am the luckiest girl in the world to have such strong supportive women around me," she wrote. (Photo via @caradelevingne)
Mariah Carey: After completely slaying her NYE performance (and sparking the first meme of 2018), Carey reveled in watching the ball drop in Times Square. (Photo via @mariahcarey)
Kim Kardashian West: The soon-to-be mom of three counted down to the new year with a crew that included a (smiling!) Kanye West. (Photo via @kimkardashian)
Justin Bieber: The Biebs celebrated in Mexico with his boys, though reports also had him counting down to midnight with his on-again love, Selena Gomez, who just so happened to be in Mexico. (Photo via @justinbieber)
Reese Witherspoon: Witherspoon wished everyone a happy new year with a whole lotta sparkle from what appeared to be a beachy locale. (Photo via @reesewitherspoon)
Kourtney Kardashian: The eldest Kardashian sister got goofy with a streamer, some 2018 glasses, and a bit of bubbly. (Photo via @kourtneykardash)
Elizabeth Banks: The Pitch Perfect 3 star made it count, spending the big night with her cousins. "I hope y'all rang in 2018 with love and hope in your hearts," she wrote. "I did." (Photo via @elizabethbanks)
Halsey: A newly blonde Halsey channeled her inner Marilyn Monroe with some soft retro waves to ring in the new year with her BF, rapper G-Eazy. (Photo via @iamhalsey)
Hilary Duff: Duff did some exploring in Antelope Canyon near Page, Arizona, with BF Matthew Koma before taking a quiet moment for herself, presumably to reflect on the new year at hand. (Photo via @hilaryduff)
Ryan Seacrest: As the host of Dick Clark's New Year's Rockin' Eve, Seacrest braved some mighty chilly weather (9 with a minus-4 wind chill, to be exact!) in Times Square. Still, he said, "No place I'd rather be on New Year's Eve." (Photo via @ryanseacrest)
Salma Hayek: Hayek couldn't contain her joy for the new year, beaming in front of a giant light-up 2018 sign. (Photo via @salmahayek)
Ashlee Simpson Ross: Simpson Ross' midnight kiss appeared to be daughter Jagger, though hubby Evan Ross was right there to celebrate with the rest of his fam. (Photo via @ashleesimpsonross)
Dakota Fanning: Fanning spent her evening at famed restaurant Sur, along with the hostess with the mostest, Real Housewives of Beverly Hills star Lisa Vanderpump. (Photo via @dakotafanning)
Kristin Cavallari: K.Cav rang in the new year from the open water on a boat in Miami, Florida, with pal Kelly Henderson. (Photo via @kristincavallari)
Jules Hough: Hough shared a smooch with her hubby, Brooks Laich, presumably at the stroke of midnight. (Photo via @juleshough)

How did you spend your NYE? Share over @BritandCo.

How did you spend your NYE? Share over @BritandCo.

Nicole Briese
Nicole is the weekend editor for Brit + Co who loves bringing you all the latest buzz. When she's not busy typing away into the wee hours, you can usually find her canoodling with her fur babies, rooting around in a bookstore, or rocking out at a concert of some sort (Guns N' Roses forever!). Check out all her latest musings and past work at nicolebjean.com.
Celebrities
Celebrity News
Celebrities Instagram Kardashians NYE Reese Witherspoon social media
More From Celebrity News