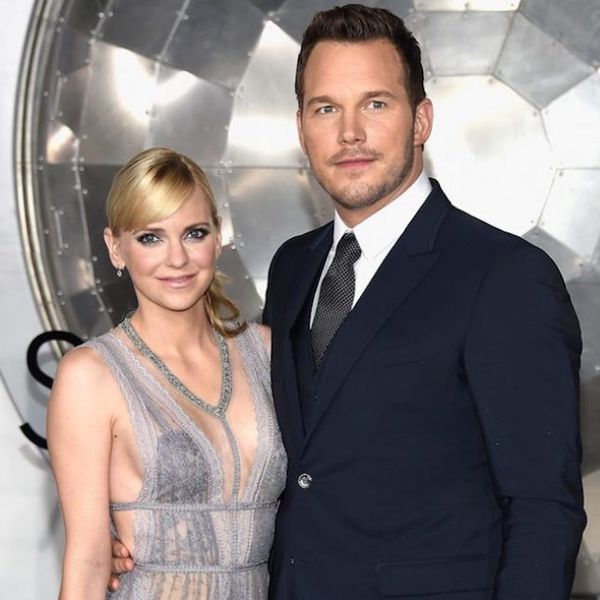 Chris Pratt and Anna Faris are having the best time ever on his Guardians of the Galaxy Vol. 2 press tour. After stealing the red carpet in Los Angeles with their hilarious awkward prom poses, the couple are at it again in London.

The cuteness continues! 💕 #AnnaFaris and #ChrisPratt prove to be the most in-love couple at the London premiere of #GotGVol2. Swipe to laugh at their silliness. ➡️|📷: David Fisher/Vianney Le Caer/REX/Shutterstock

While making their way down the blue carpet, Faris stunned in a Juan Carlos Obando purple velvet dress, Sophia Webster shoes, a Tyler Ellis clutch, Harry Kotlar earrings, and Sydney Evans rings. Pratt looked dapper in a striped suit and a polka dot tie. But aside from wowing with their red carpet style, they also had some — okay, a lot — of fun.

Faris couldn’t seem to keep her hands off her husband. She grabbed his backside as they posed on the red carpet and it basically resulted in this hilarious photo op.

My gorgeous wife givin me the ol' football atta boy. Love it!!! https://t.co/cwdObd19zc

Her funnyman husband took the prank in stride and joked about it on Twitter. “My gorgeous wife givin me the ol’ football atta boy. Love it!!!” Pratt wrote.

Farris and Pratt have been married since 2009 and the Guardians of the Galaxy actor had some mighty sweet things to say about his wife and mother of his child, Jack. “She’s funny, she’s strong, she’s beautiful,” he told E! News. “She’s gracious. She is really smart. She’s just kind of better than me in every way. She’s perfect.”

All together now: awwwwwww!

What do you think of the couple’s red carpet style? Tweet us @BritandCo.

Channing Hargrove
Channing Hargrove is a freelance fashion editor and writer in New York City. When she isn’t writing about clothing (or shopping, for research, of course), Channing is writing about life in a tiny studio apartment in a big city — and what she’s wearing — on her blog, Channing in the City.
Celebrity Couples
Celeb Style
Celebrity Couples Celebrity Style love
More From Celeb Style