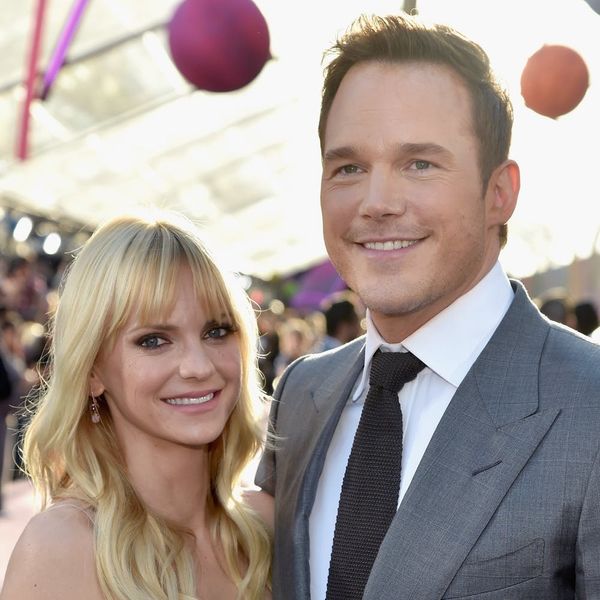 Stiff red carpet poses are so not for these two! For the Guardians of the Galaxy Vol. 2 premiere in LA on Wednesday, Chris Pratt and Anna Faris were predictably adorable on the carpet. In between glamour shots, the married couple posed for what can only be described as awkward prom pics (because, of course).

Funny antics aside, the comedic couple were also dressed to the nines. Pratt looked like a stud in a gray suit and black tie, while Faris wore a baby pink Marchesa gown with a scoop-neck bodice. She accented her look with loose blonde waves and a mother-of-pearl pink clutch.

Also on display? That gorgeous engagement ring upgrade that Pratt bought her after his film Passengers. Aww, smooches.

Though Faris looked stunning on the carpet, it was quite the process to get all dolled up, as she showed us by live Tweeting her progress.

It's the big premiere day for @Guardians -going to keep you updated! This is me at 824 am in front of the shower. pic.twitter.com/Y7jikiXshr

216pm. Getting my nails done. This is about to start getting a little Hollywood gross but hang in there. pic.twitter.com/5udyWgQh2h

What do you think of Anna’s red carpet look? Tell us over @BritandCo.

Nicole Briese
Nicole is the weekend editor for Brit + Co who loves bringing you all the latest buzz. When she's not busy typing away into the wee hours, you can usually find her canoodling with her fur babies, rooting around in a bookstore, or rocking out at a concert of some sort (Guns N' Roses forever!). Check out all her latest musings and past work at nicolebjean.com.
Celebrity Couples
Celeb Style
Celebrity Couples Designer Red Carpet