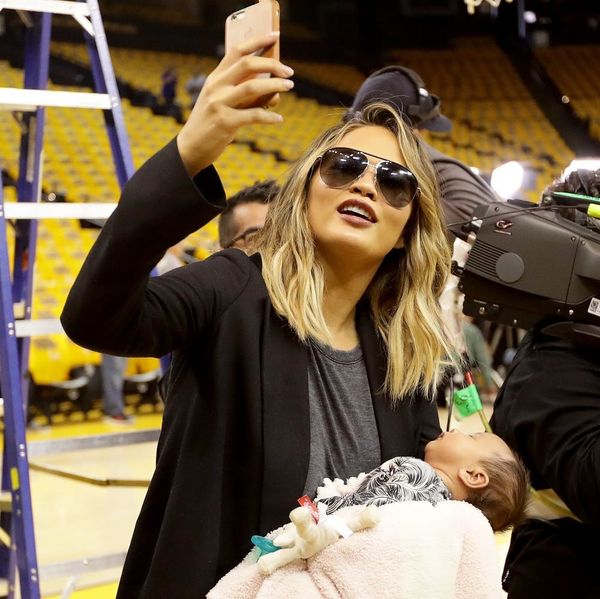 While hubby John Legend sang the national anthem at the first game of the NBA finals Thursday night, Chrissy Teigen had her own business to take care of. Or rather, it was baby Luna who had a little business to be tended to. Seeing to the little one’s dinner between attending the game courtside, Chrissy shared a few moments of herself breastfeeding little Luna via Snapchat.

Wearing the fabulous thigh-high black boots that she was spotted slaying during the game but ditching her gold jacket for the time being and moving her shirt to the side, she doesn’t attempt to cover up as she sweetly watches her two-month-old daughter enjoy a snack. Also smiling and waving at the camera, Chrissy could not seem to be enjoying motherhood more.

While some love the celeb mom’s attempts to further normalize something that is, ya know, totally natural, and applaud her for getting out and enjoying life, the typical haters (who have gone after Chrissy before) are having their say. These are the people on social media who feel like Chrissy’s public feedings and outings are a scheme to “piss off” the public. Instead of shying away from the haters, Chrissy decided to play it out with an amazing prank.

Here’s to hoping the new mom and dad were able to enjoy the outing as much as little Luna surely enjoyed her mid-game meal.

What do you think about Chrissy’s Snapchatted breastfeeding (and fake baby joke)? Tweet us @BritandCo!