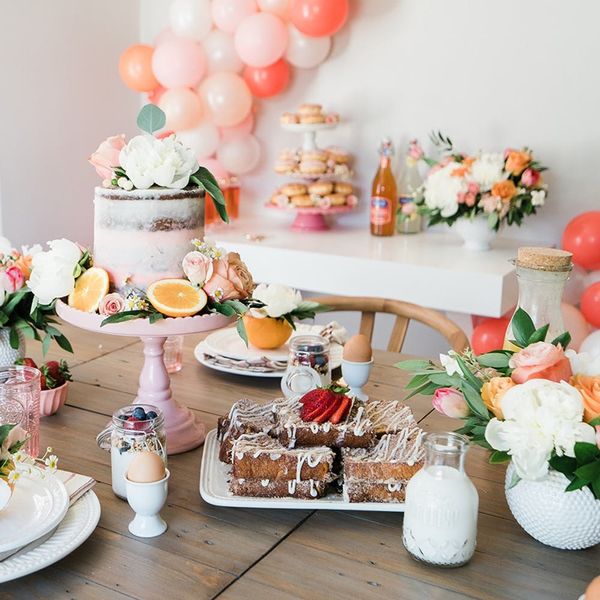 With so many details to take care of in the months before the wedding, brides can feel a bit stressed leading up to the big day. Which is why a bridal shower (or, in this case, a bridal brunch) is the best way to treat your girl like the queen she really is. This one hosted by Hello Fashion founder Christine Andrew is a totally sweet, indulgent affair worth ‘gramming about. (Um, hello on-trend donut bar!) Check out all the pretty-in-pink, Parisian-inspired details below.

Andrew was inspired by a French theme from the start. “I wanted to incorporate a feminine, Parisian feel as a nod to a girls’ trip the bride-to-be and I went on earlier this year to Paris. Breakfast food was an easy choice: It’s the best meal of the day and Whitney’s favorite, so it inspired me to throw a feminine, Parisian brunch,” she tells Brit + Co.

“[Bride-to-be Whitney] has been working with me for four years and has basically become family. She is one of the most giving people that I know and is always doing so much for other people. We were excited to spoil her to celebrate her big day!” says Andrew. “I had seen balloon arches on Pinterest and Instagram and was excited to have an event where I could incorporate a beautiful balloon arch. It strayed from the Parisian tone, but it was so bright and colorful that it made for the perfect focal point for the party,” she tells us.

Details were key in making sure that the entire event was flawless. “I was recently at a hotel and saw an orange peel used as a vase for fresh flowers, so I knew I wanted to incorporate pretty orange and pink tones,” says Andrew.

The donut tower, piled high with “I DO” donuts, was definitely a crowd favorite. Playful touches like this kept the vibe “bright, cheery, and feminine to set the celebratory mood,” Andrew explains.

“I really wanted to incorporate some personal elements to the shower, so we talked to the bride’s sister and found out that French toast was her favorite breakfast food. I also wanted to bring in a few things reminiscent of our recent Paris trip,” says Andrew. “She had said one of her favorite things in Paris was the yogurt, so we tried to find the same type of yogurt to incorporate in the parfaits and make them feel Parisian in glass jars.” But even the French toast had an extra-indulgent spin. “The cinnamon churro French toast was the biggest hit! We’ve never had anything even similar, and it quickly became one of my favorite foods!” Andrew tells us.

Emily Bihl
Emily Bihl is a freelance writer and sometimes-songwriter currently undoing a lifetime of healthy eating in the great city of New Orleans. When she’s not writing, she can be found covered in clay at the ceramics studio or attempting an approximated downward dog. She likes her black labrador Selkie, unexpected anagrams, and cracking the sugar on creme brûlée with the back of a spoon.
Bridal Shower
Party
Bridal Shower Party Decor Party Ideas wedding
More From Party