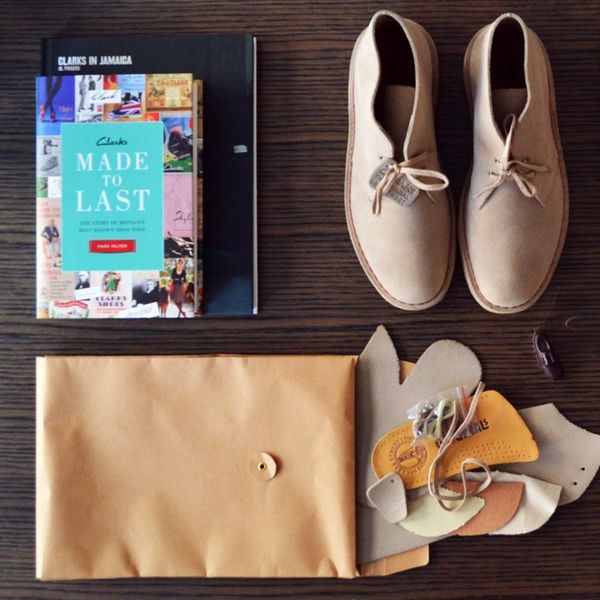 Clarks boots are an icon. They live in that sweet spot where boot meets sneaker. Casual enough for every day, with enough style to make your look feel totally pulled together. To celebrate 65 years of stylish boots, Clarks has recruited 14 UK-based artists to help commemorate their anniversary.

To recruit the designers, project curator Filippo Tattoni-Marcozzi tapped British-based designers who use street-style inspiration in their work along with decades of artistic influence. They asked the artists to design art pieces inspired by and reinterpreting their Desert Boot in addition to creating their own signature design for the boot. The project is called Clarks: Rebooted.

If you’re in New York in May, you can catch the complete collection on display at Frieze before they eventually land in London for auction. Even if you can’t see them there, starting in April, two of the designs will be produced each month and released as a 250-pair limited edition. Sneakerhead or not, these kicks will be hard to resist.

Even better — because who doesn’t love conscious fashion — all of the proceeds of the auction and 5% of all limited edition sales will donated to The HALO Trust, a land mine–removal organization which also served as a partner and inspiration for Clarks: Rebooted.

Which pair is your favorite? Let us know in the comments!

Katelan Cunningham
Katelan is a tech junkie obsessing over all things startup and design. She has entirely way too many apps on her phone and is no stranger to binge-watching. She accidentally fell in love in Los Angeles and that’s where she currently lives, writes, tweets and grams.
Boots
Fashion
Boots Design Designers
More From Fashion