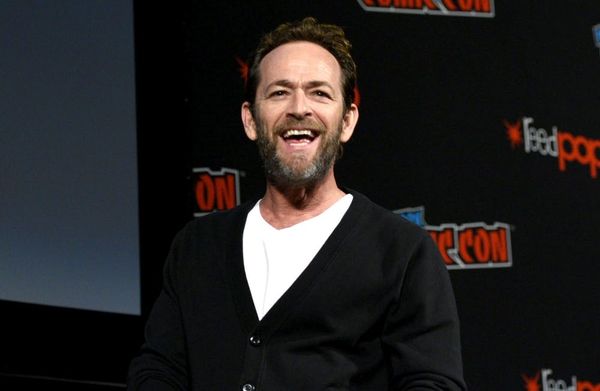 As the entertainment world continues to mourn the death of Luke Perry on Monday, March 4, loving tributes are still pouring in from his fans and peers in Hollywood. Among the most touching is a post from Colin Hanks, who took to Instagram to share the story of the one time he met Perry on a plane.

“My wife and I are on a plane back from Mexico,” Hanks began the story. “Couple of rows ahead of us, these two brothers, young kids, are beating the hell out of each other. Their poor parents are powerless to stop the crying, yelling, and screaming. If you’re a parent you understand.”

The Life In Pieces star recalled that, about two hours into the flight, the fighting between the kids escalated, and about 10 minutes before landing, it reached a frustrating fever pitch. That’s when a surprise appearance from Perry saved the day.

“Out of nowhere, a man comes from first class,” Hanks continued. “Hat, beard, sunglasses, blowing up a balloon. He ties it off, hands it off like he’s holding out a sword to a king. Kneeling, head down, arms up. Kids calm down in milliseconds. Plane damn near bursts into applause. Fifteen minutes longer and it probably would have started WWIII, but we landed before that could happen.”

Later, as Hanks and his wife, Samantha Bryant, waited in line at customs, he realized that the “balloon man” was Perry. Soon, the two actors were standing next to each other, and before Hanks could thank the Riverdale star for his expert move, Perry turned to him and complimented his work on the Fargo TV show.

“[It] kinda blew my mind,” Hanks admitted. He then told the Beverly Hills 90210 star that he had long been an admirer of his work and was now also in awe of his way with kids.

“He tells me he always flies with a couple of balloons for that very reason, to give to screaming kids. Don’t know if that’s true, but have no reason to believe it wasn’t,” Hanks wrote. “Guy seemed like a true gent. Gone way too damn soon. Also, I’ll be damned if I don’t start traveling with some spare balloons.”