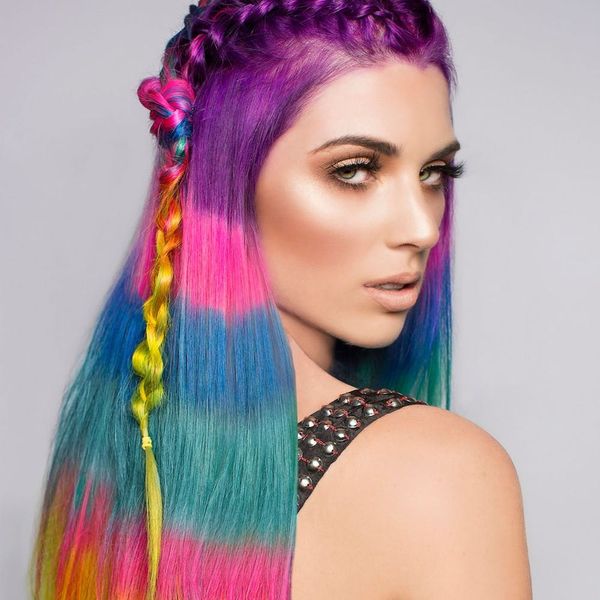 Color blocking is an idea we’ve been pretty major fans of for some time now. Usually, we’re applying the style to a pair of DIY bookends or maybe even our wardrobe, but PRAVANA’s newest rainbow-haired experiment is making us want to try the technique on some previously uncharted territory: our hair.

PRAVANA, a leading hair product brand, wowed us a few weeks back with that epic sand art hair by Rebecca Taylor, and now they’re back again with a whole new look. This time the company has teamed up with celebrity colorist Danny Moon to create a more structured and futuristic alternative to Rebecca’s nostalgic creation.

Moon used PRAVANA’s VIVIDS LOCKED-IN hair dye to create this segmented look (you can check out a video of his entire process here). The new line of colors makes it possible to have a variety of colors in close proximity without them transferring or bleeding into one another. Like anyone who takes the colored hair plunge, the hair model, Alexis Cutler, first had to lift her hair from brown to bleach blonde — think of it as creating a blank surface for the color. After that, Moon carefully painted small sections of Cutler’s hair from the roots to the ends.

This style definitely doesn’t have the same sense of movement as the sand art hair, but it’s still super cool in its own right. We were going to apply the technique to a side table this weekend, but now we may just head to the salon instead.

Would you try this color blocked style? Share with us in the comments below.