5 Highlights From #CreateGood Day Four: The Best Art/Life Lesson You’ll Ever Get 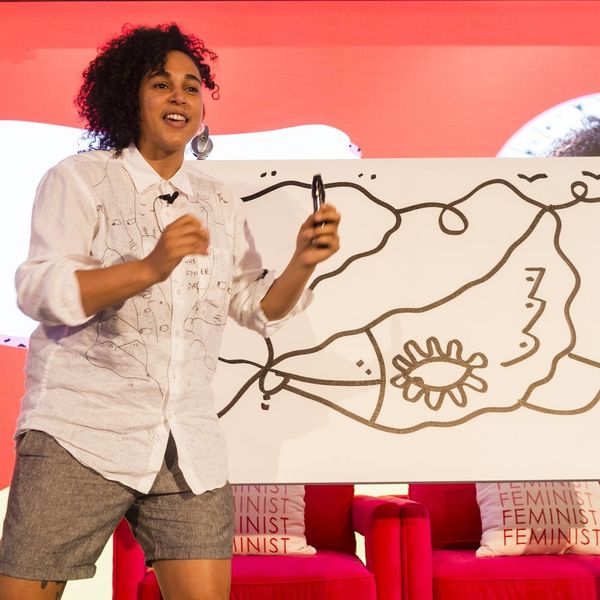 Couldn’t make the #CreateGood Art panels? Check out the top five highlights from tonight. And don’t forget to check us out at 427 Broadway in SoHo, from 11:30am to 4:30pm, October 4-8.

1. Shantell Martin gave us the best art lesson we’ve ever had.

Shantell Martin started her live-drawing presentation by asking who in the room could draw. There were a lot of artistic people in the audience, but not everyone put their hands up — and Martin says we’re underestimating ourselves. “Drawing is a foundation. It’s how you get to know yourself, how you get stuff out, how you express yourself,” she told the #CreateGood crowd. “Even if you can only draw stick figures, if you draw that a thousand times, you get to own it and claim it.”

She also said you don’t always have to know what you’re creating before you create it. “There’s something really magical about not planning and just allowing … not forcing things, not pushing things, just allowing them to become what they should be,” she explained.

2. Melissa Ben-Ishay showed how failure can sometimes be the first step to success.

Today, Melissa Ben-Ishay is the owner of a massive cupcake business, Baked by Melissa, but 10 years ago, she was on a very different path. “I was working in advertising, I was 24 years old, I was an assistant media planner, and I wasn’t passionate about what I was doing, and I was fired,” she told Brit + Co founder Brit Morin. “It was like the worst day ever, but I had to take control of the way that I felt. If I wanted to be happy, I needed to do that.”

It turned out to be the best thing that ever happened to her. In losing her job, she found her true passion — baking. She and her brother started a cupcake business, and she never looked back. “Figure out what you love to do,” she told the crowd at #CreateGood. “And surround yourself with people who have skills that you don’t.”

3. Pinball is a great way to deal with creative blocks.

As Instagram creators Sam Ushiro (@aww.sam), Eunice Moyle (@helloluckycards), and Amy Tan (@amytangerine) explained to Brit + Co Chief Creative Officer Anjelika Temple, sometimes the best thing you can do for your art is to walk away from it. All three said that when they feel creatively blocked, they look for something else to do besides the task at hand.

“I try to do something that’s completely different from what I do every day,” Ushiro explained. “So, I personally, I go play pinball. I think that helps with the stress.”

“It’s amazing what comes up in your subconscious,” Moyle added. “Often, if you just let it go and start all over again, the really brilliant idea comes.”

When she became Pixar’s Director of Photography and Lighting several years ago, Danielle Feinberg let a lot of other people do the talking in meetings. She was new to the role and assumed they knew better than she did. But that wasn’t always the case. Her experience was just as valuable as theirs, and she was in those meetings because she deserved to be.

“I had really been mistaking confidence for actual knowledge. And it was like a reveal from Wizard of Oz. And then my next thought was like, ‘Why didn’t people tell me this is what happens?’ I think that’s the big thing — you can’t just believe everything everyone is saying,” Feinberg — who has worked on movies including Toy Story 2, Finding Nemo, Inside Out, and the upcoming Coco — told Brit + Co Editorial Director Annette Cardwell. “Me sitting silently in that room doesn’t help anyone and certainly doesn’t help make a movie.”

Her grandmother, who died at the age of 94 while Feinberg was working on Coco, lived that lesson for decades. “She was a woman in rooms where she was the only woman in business there,” Feinberg shared. “And she just never let it stop her.”

5. Everything you need to know about event planning, you learned in kindergarten.

Darcy Miller, the founder of Darcy Miller Designs and editor-at-large for Martha Stewart Weddings, says you already know everything you need to know about planning a beautiful — and, more importantly, fun — celebration for your loved ones. Her top 10 tips for creating memories are all things you learned when you were a kid. Our favorite? “Use the buddy system.” As she explained to the #CreateGood crowd, “You don’t have to DIY, but I always say you should DIT — do it together.”