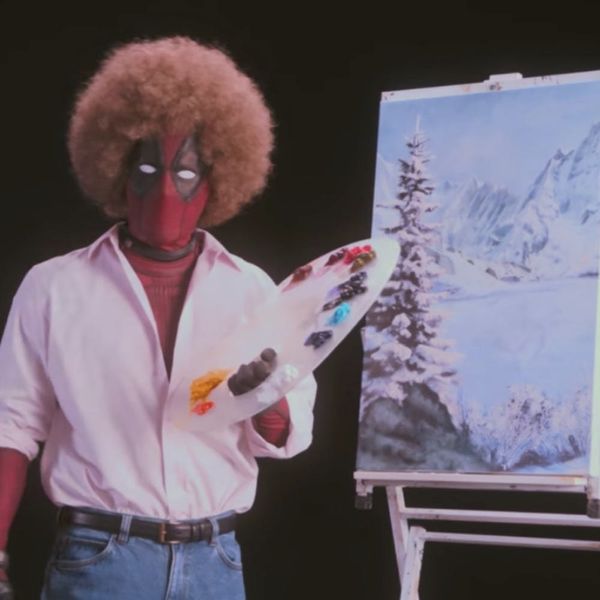 Ryan Reynolds is set to return as Betty White’s favorite antihero in Deadpool 2 next summer, and if the first teaser is any indication, it’s going to be every bit as action packed — and hilarious — as the first movie.

The truly bizarre two-minute clip starts with Deadpool giving an instructional art lesson. Of course he cracks plenty of the juvenile jokes we’ve come to expect from the action star, including a “yellow snow” quip. Oh, and did we mention that he happens to be doing all of this while dressed up as and giving his best impression of late Joy of Painting icon Bob Ross? Yes, he of the recent secretly-straight-hair controversy.

As for the actual movie, we get plenty of quick-cut, action-packed glimpses of what’s to come in a short, rather violent montage. In it, we see T.J. Miller, Josh Brolin as Cable, Brianna Hildebrand as Weasel Negasonic Teenage Warhead, and a few more. So far, no sight of Atlanta breakout star Zazie Beetz as Domino — but we already know how badass that’s going to be.

The trailer then returns to the painting lesson with Reynolds-as-Deadpool-as-Ross stating, “Hugs not drugs.”

This summer, Deadpool 2 was struck with tragedy when motorcycle stuntwoman Joi “S.J.” Harris died in an accident on the Vancouver set. Production was halted for two days and resumed with a moment of silence before starting filming upon return. Deadpool 2 is set to come out on June 1, 2018.

Do you think Ryan Reynolds as Deadpool does a good Bob Ross impression? Let us know @BritandCo!