Disney’s New ‘Star Wars’ Land Looks Out of This World 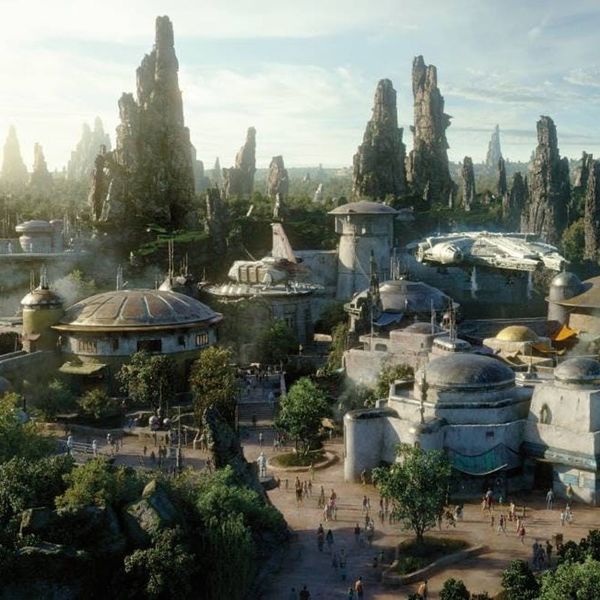 Forget about all those summer plans you've been toying with. There's just one thing that should be at the top of your to-do list, especially if you're a Star Wars or Disneyland fan (even more so if you're both!). This year will see the grand opening of the much-anticipated Star Wars: Galaxy's Edge at both Disneyland (May 31) and Walt Disney World (August 29).

At Disneyland, the opening will be in phases; Millennium Falcon: Smugglers Run will be up and running on opening day, but Star Wars: Rise of the Resistance will debut later this year. If you plan on being one of the first to visit the new land between May 31 and June 23, you'll need to make a reservation (at no additional cost to your park ticket). A good move is to book a room at one of the three Disneyland hotels since guests staying there will score a designated reservation to access Star Wars: Galaxy's Edge. Read on to see a little sneak peek of what both parks have in store for us.

1. The Land: Star Wars: Galaxy's Edge is located on the planet Batuu, a wild frontier on the galaxy's Outer Rim. The main draw of this far-flung planet is the Black Spire Outpost, a destination for smugglers, traders, and adventurers. You might even spot Star Wars luminaries like Chewbacca or those pesky stormtroopers mingling alongside the aliens and droids who are unique to Batuu.

2. The Rides and Experiences: If you've ever fantasized about taking the Millennium Falcon for a spin, this is your chance. Guests on the Millennium Falcon: Smugglers Run take on various roles — pilots, gunners, and flight engineers — as the ship navigates through space on a unique and no doubt intense Star Wars adventure.

Star Wars: Rise of the Resistance is billed as "one of the most advanced and immersive experiences ever undertaken by Walt Disney Imagineering." This state-of-the-art ride allows guests to join an epic battle against the First Order and the big bad that is Kylo Ren. As part of the journey, guests venture inside a full-size starship and a massive Star Destroyer.

3. The Immersive Elements: Galaxy's Edge is leveraging itself as an interactive and immersive experience in a way theme park visitors have never seen before. Guests can go on missions, play games, and have in-line adventures (and you know there will be lines) via the Play Disney Parks Mobile app. The app also has ways to translate a galactic language, to discover what's hiding inside various crates and containers, and to interact with droids, ships, and even drinking fountains.

4. The Shopping: Of course, there will be plenty of opportunities to separate you from your money. Thankfully, the brand new Star Wars merch looks worthy of whipping out your credit card. At Dok-Ondar's Den of Antiquities you can acquire mysterious items from different eras of the Star Wars galaxy, including the glowing holocrons above.

A crafty Toydarian (the flying alien species from Star Wars: Episode I – The Phantom Menace) happens to be a toymaker and has a stall that sells a variety of artisan toys paying tribute to a wide range of Star Wars luminaries. At the Creature Stall, guests can adopt of the fascinating (and sometimes fabulously furry) creatures that live in the Star Wars galaxy. In addition to these shops, there will be a Droid Depot (where you can make your own droid), Savi's Workshop – Handbuilt Lightsabers for custom weaponry, Resistance Supply for looking the part, and the First Order Cargo to stock up on First Order items and ephemera.

5. The Drinks: There was a time when the only place you could get an alcoholic beverage in Disneyland proper was at Club 33 (if you could snag an invite, that is), and Oga's Catina is changing that. This is the kind of place you'd find Han Solo during his smuggling days, so it's already a little edgy. Drinks include themed Dagobah Slug Slinger, Fuzzy Tauntaun, Jedi Mind Trick, Jet Juice, The Outer Rim, Spiran Caf, T-16 Skyhopper, Bespin Fizz, Bloody Rancor, and the Yub Nub. Along with the exotic concoctions, you'll be entertained by DJ R-3X, AKA Rex, the former Starspeeder 3000 pilot droid from the original Star Tours.

6. The Food: All that drinking will make one hungry, and there are plenty of culinary choices with a rather healthy vibe. At Docking Bay 7 Food and Cargo, a "traveling diner for diners traveling," Chef Strono "Cookie" Tuggs serves an array of items made with exotic ingredients. In the Black Spire Outpost market, a droid rotates the spits of BBQ meats which are used in a variety of sandwiches at Ronto Roasters. For those looking for a quick snack, Kat Saka's Kettle sells popcorn mixed with a combo of sweet, savory, and spicy flavors.

Get ready to grab your tickets to Disneyland and/or Disney World, and let us know how excited you are by tweeting us @BritandCo.

From Your Site Articles
Sunny Chanel
Sunny Chanel is a freelance writer as well as the founder of the whimsical site Wonder and Company. When this proud San Franciscan isn't writing, working on her fixer-upper or doing crafts, she is playing dress up with daughter and planning her next trip to Disneyland.
Disney
Travel
Disney disney world disney land star wars star wars day theme park activities family activities family walt disney
More From Travel