This Is a Drought Solution We Didn’t See Coming 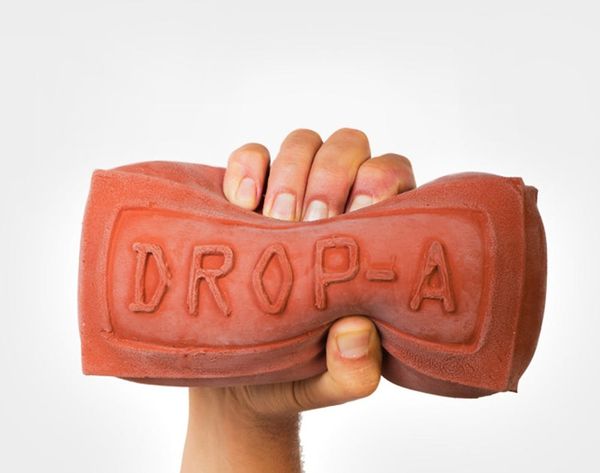 California is in a state of emergency. We’re in the midst of the most severe drought in recent history, and it’s not just affecting people’s lawns. Some towns have flat-out run dry. But a group of entrepreneurs in San Francisco has come up with a hilariously simple solution to this really serious problem. It’s a solution that can save millions of gallons of water every day, and you don’t even have to think about it. You just have to drop a brick. Excuse our potty mouth, but that’s not a euphemism.

Putting a stone brick in the toilet tank is actually not a new idea. People used to do it all the time for flushes that save on water. This works for a little while, but soon enough the brick breaks down, wreaking havoc on your pipes, so after much trial and error, Drop-A-Brick was created as a toilet-friendly water saver.

Drop-A-Brick is made from a eco-friendly rubber mixture, making it absorbent and light enough to ship. With the brick in the tank of your toilet, you’ll save 1.5 liters every time you flush. That’s 3,000 gallons per year for a family of four. Not only is your low-volume flush helping to save the environment, it’s making your toilet work better by making water move faster through the flush valve.

Here’s a fact that’s really hard to believe. The Environmental Protection Agency says, “Americans use more water each day by flushing than they do by showering or any other activity.” Flushing the toilet is such a routine, we don’t even notice how much water we’re using by doing it. That’s what makes the Drop-A-Brick so ingenious.

In California, our flushes are especially wasteful, using an average of 2.7 gallons, which is one gallon more than the federal standard. That adds up to 203 million gallons being wasted EVERY SINGLE DAY. That’s one year of water supply for one million people being wasted daily just in the state of California. Talk about a reality check.

Right now the Drop-A-Brick needs funding to get going, and they’re crowdfunding their way to mass production via IndieGoGo. They’re campaigning to raise $80 thousand by the end of October, and we really think they can do it. Heck, for $15, you get your own brick and one to pass on to a friend. That’s a great deal, especially considering you’re saving the environment.

You can check out the campaign here, and chip in what you can to Drop-A-Brick. Let’s save water one flush at a time.

Would you Drop A Brick? Let us know what you think of the idea in the comments!

Katelan Cunningham
Katelan is a tech junkie obsessing over all things startup and design. She has entirely way too many apps on her phone and is no stranger to binge-watching. She accidentally fell in love in Los Angeles and that’s where she currently lives, writes, tweets and grams.
Bathroom
Home News
Bathroom Eco-Friendly indiegogo
More From Home News