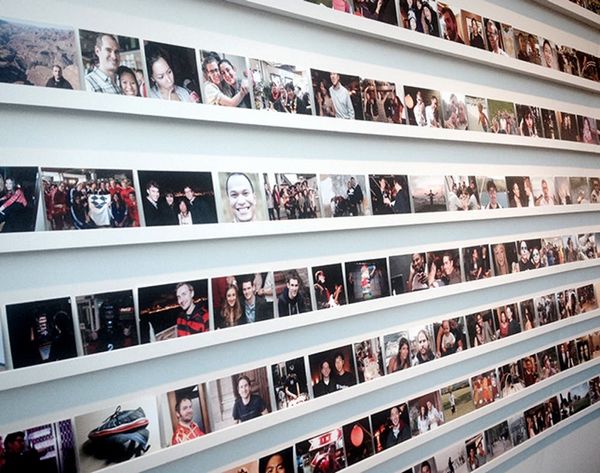 Today was a big, busy day for Dropbox, which launched new features and apps aimed at taking the stress out of your life — at least when it comes to all that tech in it. From business to pleasure to increased productivity, here’s a look at some of the new ways Dropbox can help you stay organized and even (gasp!) enjoy the process.

Let’s start with Carousel, our favorite announcement (we bet it’ll be yours too!) and a new app that aims to become your go-to for storing and sharing photos. Not just the ones you Instagram, not just the ones you took at the picnic this weekend (but def those too), Dropbox wants you to have every picture EVER with you at all times. That’s all the pics you take + all of the pictures of you that other people take. Finally! Memories normally relinquished to live and die on phones and memory cards can now have a real life.

Scroll through the wheel at the bottom to browse through the timeline of your life in images, then share select photos privately with individuals or groups. Add comments in each group just like you would in texts. Which is exactly what it looks like, right? Dropbox designed this feature to feel and function like SMS. It’s interesting to see a storage system go way beyond that and become a sort of selective social network that lets you curate who sees what instead of opening up every album to all your followers on Facebook or Flickr. Or trying to fumble with Facebook’s ever-changing privacy settings to restrict who sees what.

Another feature we’re pretty excited about, is that Carousel automatically organizes your photos by events and backs up pics you snap to Dropbox so you can access from any/all devices. Say you have an epic night out and, oops, wake up with no phone. No bigs, your photos are all backed up to DB. Every last embarrassing, epic… well, epic-in-the-moment one. To share. Or, um, delete.

If you’re an iOS user who shares photos with friends and fellow iPhoners though the cloud, this all might sound familiar. Carousel is a great sub if everyone has the app and enough storage, though Dropbox does cost some dough: $9.99 a month or $99.00 a year for 100GB of space.

Dropbox’s email app Mailbox might already be showing you a world where Inbox Zero actually exists. Today, they launched their Android version (rejoice, anti iOSers!) and the new auto-swipe feature that hopes to make e-life e-ven e-asier across all platforms. Yay! It’s kind of like having unroll.me built right into your email. Say you delete certain newsletters every day — it will ask you if you want to trash all of them from now on. Maybe you’re on a too-long group email about a party you RSVPed “No” to. It will ask if you want to auto-archive messages in the thread so you don’t FOMO to death for gosh sakes.

They’re also testing out a desktop Mailbox tool that we want to get typing on. It will let you send emails from your phone to work on when you’re back at your computer — perfect if you need to write a thoughtful note that you don’t want to thumb through. It will mirror what you already know and love about the app on your comp using trackpad gestures to swipe left and right just like (duh) you do on your phone. It’s only available right now in limited beta, so visit Mailboxapp.com to sign up.

Besides pleasure, Dropbox knows a thing or two about business. If you and your coworkers use collaborative folders already, they’re making the process better with “Project Harmony.” It’s a new initiative that works when you’re collaborating on Microsoft Office projects within Dropbox. That little green check mark that lets you know your projects are up to date will now show the name of anyone else who’s also working in the doc. Click on it and you can talk to the other person (or people) within the project in a little chat box. If someone makes a change, you’ll be prompted to press a link to refresh it.

If your coworkers are not using Dropbox yet, tell them that David Guetta uses it to collaborate with his coworkers — other musicians. They’ll be down.

Do you use Dropbox? Which of the newly launched apps/features do you want to try out? Sound off below!

Lisa Raphael
In her past professional lives, Lisa has served the masses as the Editorial Director at Brit + Co, Bieber Whisperer at J-14, Golden Girls Fan Club Prez at Lifetime and Talk Show Host Understudy to Katie Couric. Now, she's taking on the sports world at The Relish, teaching Hairography 101 in her spare time and will forever be trying to fill the hole Zayn Malik left in her heart.
Android Apps
Tech
Android Apps photo apps
More From Tech