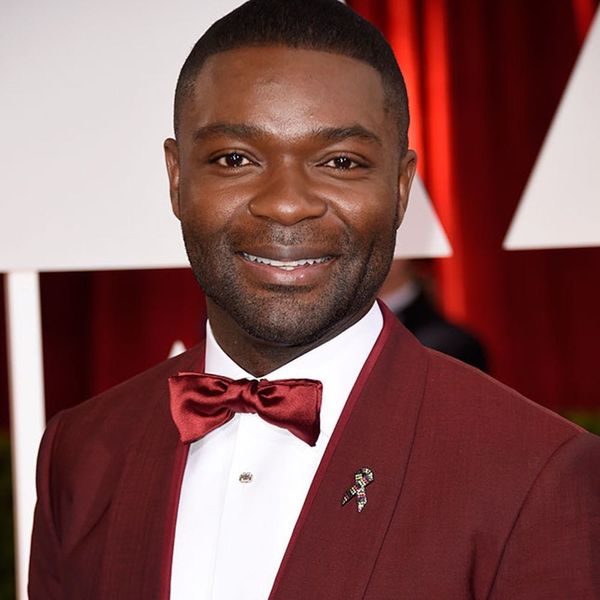 The ladies aren’t the only ones who took some fashion risks at this year’s Academy Awards. The leading dudes of Hollywood also stepped up their sartorial game on last Sunday’s red carpet. Okay, no one showed up in a jacket covered in 6,000 pearls like Lupita, but there were still a few shockers. We saw a whole slew of guys who brilliantly revived the white tuxedo and, more surprisingly, a few who gave your grandma’s brooch a manly makeover. Scroll on down to check out the top six men’s fashion trends we spotted at the 2015 Oscars.

1. White Jackets: The most prominent trend at this year’s Oscars was by far the white tuxedo jacket. While the style can easily look costume-like or dated, these celebs totally rocked it by elegantly mixing black and white. Jeff Goldblum and Benedict Cumberbatch sported pretty much identical outfits, while Adrien Brody’s look offered a bit more originality with a black lapel. (Photos via Jason Merritt/Getty)

2. Midnight Blue Suit: Offering up another fun twist that’s not quite as loud as the white jacket was the slim cut, midnight blue tuxedo. Both The Fault in Our Stars‘ Ansel Elgort and “Best Actor” winner Eddie Redmayne sported the color with black accents. They differed just slightly in the lapel though. Ansel’s Prada suit featured a shawl collar, while Eddie’s Alexander McQueen number offered wide peak lapel. (Photos via Jason Merritt/Getty)

3. The Man Brooch: Who said brooches were only for ladies? Some of the most style-savvy dudes at the Oscars sported sparkly accessories on their lapels. Jared Leto kept with his ’80s prom vibes and wore a delicate pink rose designed by Fred Leighton. Common opted for a small silver and blue floral pin and Questlove went all out with a pixelated heart made from Legos. (Photos via Jason Merritt/Getty)

4. Shawl Collars: Differing slightly from the standard notch lapel that’s typically most common, these rounder shawl collars dominated at this year’s Oscars. The look was subtle on David Oyelowo’s burgundy ensemble, but was made much more prominent by the material contrast on both Neil Patrick Harris and Chiwetel Ejiofor’s jackets. (Photos via Jason Merritt/Getty)

5. Unique Suit Jackets: There was already a fair amount of originality in the tuxedo department last Sunday, but these two dudes went above and beyond. Matt McGroy from How to Get Away With Murder dawned a Brooks Brothers jacquard jacket, while Chris Pine rocked a double breasted look. (Photos via Jason Merritt/Getty)

6. Pocket Squares: Offering up what was possibly the most charming trend of the night, Wes Anderson and J.K. Simmons both added a little bit of color to their ensemble with vibrant pocket squares. J.K Simmons won for “Best Supporting Actor,” but if there was an award for most adorable dude we might have to give it to him for sporting a pocket square made from the same material as his wife’s dress. (Photos via Jason Merritt/Getty)

Which trend would you like see on your favorite man? Share with us in the comments below.

Cortney Clift
Cortney is the senior writer and special projects editor at Brit + Co. She typically covers topics related to women's issues, politics, and lifestyle. When she's not buried behind her computer you'll find her exploring New York City or planning her next big adventure.
Oscars
Party
Oscars Red Carpet
More From Party